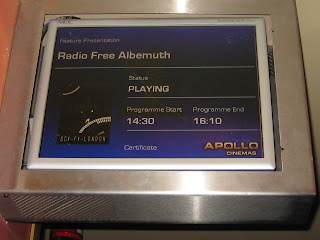 Just got off the phone with director John Alan Simon (yeah, that's how we roll) and he was excited to announce Radio Free Albemuth won the award for Best Film Adaptation at the London Science Fiction Film Fest. Not only that, they sold out the first screen and added a second, the festival's organizers proclaiming, "In our view, the best adaptation of PKD’s work to screen by far!"We've even got pictures! 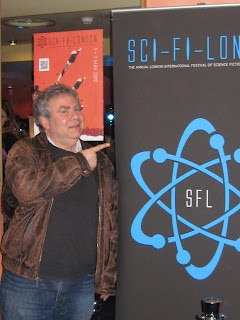 Simon at the Fest 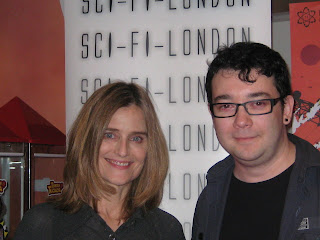 High praise indeed. So when are you we going to get a look at RFA stateside? Good question. We are working hard on arranging a showing of Radio Free Albemuth at the Philip K Dick Festival scheduled for Sept 22-23 in San Francisco, so there's yet another reason to attend. Stay tuned for more info about the Festival to come shortly. 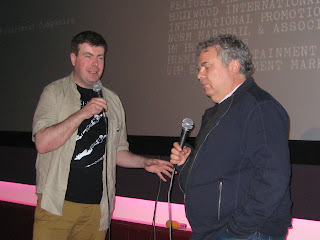 This news about RFA will no doubt provoke commenters to lament their lack of eye laying on this movie. One thing talking with John Alan Simon makes very clear is that Hollywood is a terrible place, a Skynet-already-won wasteland. And here's John; he's carrying this movie on his back through the muck. Just reserve the movie on Netflix, like it on Facebook, and get your ass to San Francisco for our screening in September.
Posted by Ragle Gumm at 8:20 PM

All this is very nice indeed, but I gotta ask: how will the rest of the world watch it? I'm in Greece, and I don't see it coming to a festival near me any time soon...

Gryzor, I guess you'll have to continue to be patient. Don't you guys in Greece have bigger things to worry about then when RFA's going to premiere? Or have I been mislead?

Gryzor: You just missed seeing Radio Free Albemuth at the Athens International Science Fiction and Fantasy Film Festival! Stay tuned to www.radiofreealbemuth.com and Radio Free Albemuth-Movie to get up to date news on the next screening!

I am sure it will be available sometime eventually on DVD then we can all enjoy it regardless of where we live. I am sorry for all of our brothers and sisters in Greece and hope things get better for you soon.
Love,

@Ragle: well, amidst all the doom and gloom, you do have to have something to take your mind off it, don't you? At least I've still got to eat*, so last night I finished Deus Irae :)

@Nick: I just hope it's not a crappy, NTSC DVD. Heck, I don't even have a DVD player any more! I'd gladly pay for a digital product though... thanks for your kind words. It'll get much worse before it gets any better.**

*reports *are* exagerated.
**the other day I was watching a news story on the TV with my gal and there was some weird turn of events. So I turned to her and said, "hey, this reminds me of those moments early in the PKD books where something is off; just a little off, not terribly so, but you know that this means the entire universe is about to collapse". So I guess we're still living in the Empire.

I was really hoping that the film would be released over the summer. However there would be something fitting about seeing the movie for the first time at the PKD festival. I was already planning on flying out from philly, and a screening of RFA would be like icing on the cake; a cake filled with overbearing governments,paranoia, God and maybe a hint of salvation :)

Is it definitely a 'go' for RADIO FREE ALBEMUTH movie at the PKD Fest in San Francisco? I hope so!

It's a go. RADIO FREE ALBEMUTH screens on Saturday night at 8 pm at the Philip K Dick Festival in San Francisco September 22 at 8 pm. Writer/Director John Alan Simon will be there for a q and a after the film.

Saw RADIO FREE ALBEMUTH movie at the PKD 'fest in San Francisco with over 100 other Dickheads. A very fine movie!

Wonder if it's going to be released outside the theaters in the end... preferably in a purely digital format?