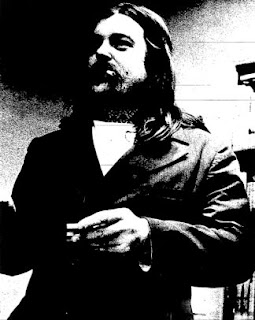 As the post-fest glow starts to fade, it's time to start the Dick-Fest nostalgia. I was honored to meet PKD's editor at Doubleday, Marc Haefele, who accounts for his Fest experience below. (This article appeared in truncated form at the KPCC Blog).

The organizers promised 90, but 130 people turned out for the San Francisco State’s Philip K. Dickfest last month. It was a 3-day event and most of the seminars were Standing Room Only. Event leader David Gill, an adjunct professor at SFSU, a PKD scholar and longtime fan, declared the occasion not really a scholarly seminar, but rather an appreciation of the man who died in 1982 as a respected genre writer and, in the 30 years since, has been raised to the Pantheon of great U.S. authors.

I can’t think of anyone else that anything like that has happened to. But Dick was a special kind of writer, even in his edgy, fringy field. He dedicated some 40 novels and hundreds of short stories to the proposition that we cannot trust what we see, know who we are, or even know if our everyday world truly exists.

This point of view seemed border-line lunacy when Phil published his first work over 60 years ago, plumb in the middle of Cold War, McCarthy-Era America. But in the 21st Century,  it seems like pretty deep wisdom. Which is why post-modern European philosophers, like  Jean Baudrillard and Slavoj Zizek, have appreciated Dick as not just a fine novelist but as  a major thinker and  grappler with the key issues of post-modern ideas.  But starting way back when the mere post-WW II “Modern” (with its atom bombs, jet planes and LP records) was still a new thing.

Oddly, the predictive “science” in Dick’s science fiction hasn’t been a factor in his triumphant ascent. Dick, as Gill noted, was no better at foreseeing 21st Century innovations such as the Internet, the I-Phone and the Social Network than were most of his contemporaries. He promised us that by 2012 space travel would have taken us to distant stars, and that the Earth would have been desolated by WW III. He somehow didn’t even grasp the burgeoning technology that increasingly surrounded him in the `70s and early `80s, such as microchips and micro-computers.  He was not a cutting-edge predictive technologist---like HG Wells.

What he did get right about the era that extended from his time into our own was something much more important:  its dissolution of certainty, of absolutes, of truth itself.

So it surprised me that, despite this, a lot of the Dickheads at the conference were scientific high-tech professionals with mighty degrees, jobs and reputations. What does Phil Dick speak to them?

“He teaches us to eradicate the default trust in technology,” says Charles Martin Reid, Ph D, a chemical engineer at Lawrence Livermore Laboratories.  He told his seminar that for centuries, science moved toward certainties. And then along come thinkers like Kurt Godel, with his “incompleteness theorems” and Dick. Now “the universe frays at the edges and knowledge keeps breaking down.”

Dick Scholar Doug Mackey’s seminar  looked at the same scientific progression  in terms of time perception, noting that Dick played with time as he elsewhere played with reality. Dick wrote one novel “Counter Clock World” in complete reverse time (famous modern author Martin Amis mimicked this theme much later in his “Time’s Arrow.”).  Dick’s time novel “Is still uncomfortable to read,” Mackey noted.  So is his 1959 “Time out of Joint”  where Dick also “is exiting the accepted temporal matrix.”

Laurence Rickels, who has a psychology chair at the European Graduate School in Switzerland, spoke on Dick’s German connections—the recurrent themes of German thought and music, as well as the Third Reich, that come up again and again in Dick’s work.  Rickels has written on the significance of mourning in human society and he spliced this topic into his Dick critique—the idea of reparations, of “Making Good.” Which is often, I think, the resolution of Dick’s novels.

Then  the discussion edged towards the thorny topic Dick’s religious convictions. Says Rickels,  “He clearly needs a savior and [often] goes and creates one. Yet his sanity and critical faculties won’t let him believe…”

This brought us to the central enigma of Phil Dick’s creative life—what he described as the religious experience of early 1974, when a series of occurrences brought to him what he called the “Pink Beam” of divine inspiration—and also what his eager editors experienced as a sudden collapse of
his sustained high-speed literary output of the previous 20 years.  Phil’s personal life had come apart, he experienced episodes of extreme paranoia, saw himself as persecuted by the US government, while he occasionally tried to reach out to the same agencies he thought were persecuting him via letters offering help waging the drug war. He was, as one then-confidant of his put it to me, “deeply disturbed” at this time. He embraced the gnostic belief he’d long examined in his writing—the idea that the universe is a field of struggle between good and evil deities. He eventually surmised that 1970s America was an illusion, that  the Roman Empire had never fallen, and that Richard Nixon was somehow now its emperor.

Out of fear and desperation, he fled the Bay Area to Orange County, behind whose conservative social bulwarks he apparently felt safer. He found a new milieu, made new friends, and completed a book on drug addiction and paranoia called “A Scanner Darkly” that was made into the most faithful and successful film of any of his works.

And he initiated the million-word analysis of himself and the Cosmos that he termed the “Exegesis,” a monster in several boxes that it took a team of scholars to drag into coherence. A panel of experts including the “Exegesis’” editors, scholars Pamela Jackson, Erik Davis, and renowned author Jonathan Lethem  (noteworthy as a major backer of Dick’s revival as literature) ran into overtime
trying to explain this vast tome, the size of eight PKD sf novels, and how, while it seemed to include every thought that then passed in and out of Dick’s head,  it was also a critique of all of Dick’s other writing and itself as well.

Dick’s last published works include ``VALIS,’’ “The Transmigration of Timothy Archer” and “Radio Free Albemuth;” all of them somewhat autobiographical and each of them drawing on his enigmatic 1974 religious apercus. They are fascinating, tantalizing evocations of Dick’s “Final Conflict;” between his rational self and his dire need to believe in something powerful, good, and beyond rationality.

Beyond this, toward the event’s end, Nottingham-Trent University Professor John Goodridge made a necessary and fundamental point that seemed to have earlier slipped away: Dick was also an immensely talented author whose characters, human and otherwise, live, breathe and die on his pages,  a skilled portrayer of“intensely crafted, delicately written” fiction of the highest order.

Which is the way most of his present and future readers will remember him.
Posted by Ragle Gumm at 7:54 PM

Excellent read - particularly Prof. Goodridge's end comment. There are far too many smug-o-crats and EnvyBots out there who decry PKD's writing as sub-standard.