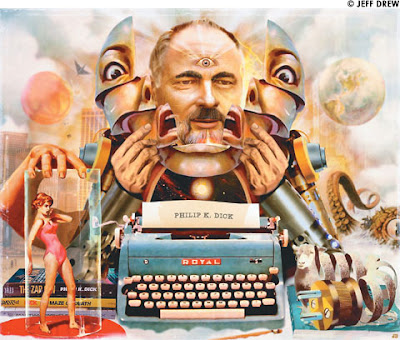 William Sarill, the name sounds vaguely familiar, right? Perhaps you've been reading Maze of Death and remember the little introduction by Dick explaining that the novel is borne out of late night discussions of religion with, you guessed it, William Sarill. Or maybe you've been looking at that picture of PKD and Nancy (the one where it looks like PKD's got a ponytail), that was taken by William Sarill. No doubt Sarill was one of the more interesting grain patterns to step out of the woodwork for the PKD Fest, peppering the crowd with anecdotes and insights about Phil Dick and his work. Now Bill has written up his thoughts for the Boston Phoenix. Read it here. And check out that awesome illustration (I pasted it above). It's quite a nice article about PKD, written by flesh and blood.

Sarill writes: "It's that spiritual yearning for answers that drew me to him in the first place — that and an appreciation for his wonderfully weird ideas and the occasional brilliance of his characterizations, so unlike those of other science-fiction writers of his era."Amen, brother.

If you're not in our Facebook group, you've missed a bit of hullabaloo introduced by Bill, regarding Dick's time rooming with Duncan and Spicer. I don't think we've talked about this. Interesting, eh?

Perhaps we can liven up the comments section with a little old fashioned debate.
Posted by Ragle Gumm at 1:39 PM

Thanks for posting this, David. My editor gave me only 600 words to describe both the Festival and my friendship with PKD, an impossible task. I was able to extend that to 800 words, but obviously a great deal had to be left out. Fortunately we have Jesse Hick's story in The Verge as well as Marc Haefele's account (not to mention your own), as well as the YouTube videos to give a sense of what actually transpired. Bravo to all of those involved who made the Festival so memorable an event.

The graphics supplied by the Boston Phoenix for my story are quite nice and can be seen in greater detail on p.28 et seq. here.