Dear readers, once again I've neglected the blog for too long. But now that the semester's grading is almost complete, and I'm enjoying some time off from work, I have some updates for you. Including a two-post, multi-foci look at the recently completed Dortmund Conference on PKD (well not so recently, last month already). So here's the most prolific Dick scholar on the planet's take on the conference (he takes pictures too! is there anything he can't do?). Take it away, Umberto. 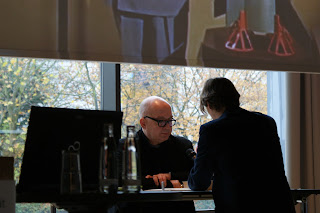 Did I say Rickels? Here he is, ready to deliver his mesmerizing speech about the German integration, helped by uncanny images of Wernher Von Braun. He said he ain't no Dick scholar. C'mon... 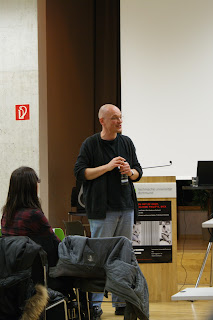 Is there anyone who knows more than Mark Bould about sf cinema? I don't think so. He delighted us with his unbelievable Dick-inspired lo-budget movies. Where did he find them? Are they real? Well, that's a question one can never ask at a PKD conference. 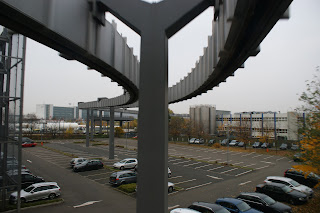 Dick in Germany? Why not! It's not just a matter of all those Germans and German artists and psychiatrist and also madmen in his novel... not just a matter of CASTLE and SIMULACRA, you know... Germany is a place with maglev monorails, hi-tech, and a lot of money. And they're ready to use that money for a PKD Conference in Dortmund. Why shouldn't we get there? Why? 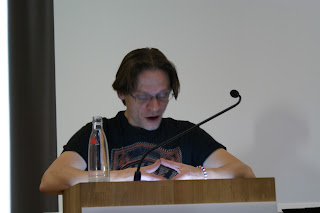 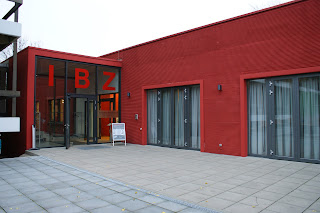 TU at Dortmund, that is the Technical University. Look what a nice building they have and let us access for our li'l conference... rationalist architecture, but not built in the Twenties... hi-tech, brand new, spic and span... No kipple... no gubble... my, I was impressed. 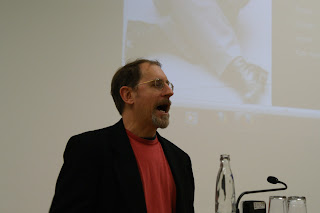 The stars first! Those who were at SFSU are familiar with Erik Davis, and I don't think I have much to add. We also had some nice breakfast-time talks. Well, he and Laurence Rickels were so patient as to bear with my rambling talks about Italy and other matters. 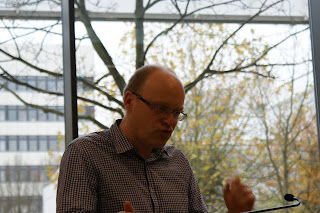 And then there was Roger Luckhurst, the rising star of UK sf scholarship, who debunked all that psychiatric rigmarole, and when he was over it wasn't a rigmarole anymore. Psychiatry evolves, folks, and it's full of shifting realities. Just like Phil's stuff. 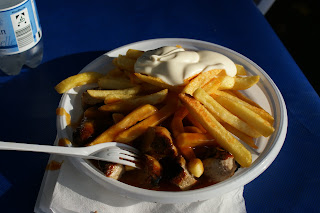 Currywuerst mit pommes-frites... just the right thing to have for lunch in that cold, damp weather... not exactly a wub steak, yet... 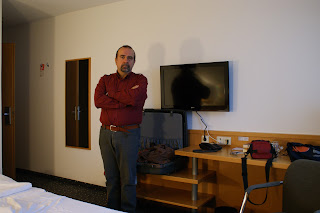 And then there was the Italian delegation. Ok, you know this man, a dangerous hoodlum intellectual. Suffice it to say he was there, and his tv program was quite successful--I mean not too unsuccessful. He wasn't assaulted with orange rinds and rotten tomatos. 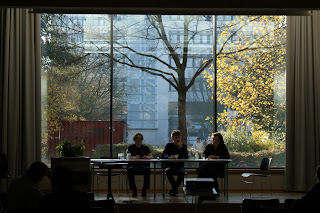 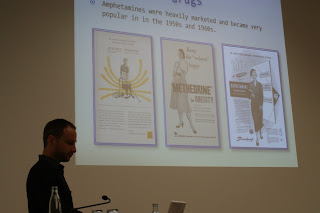 Chris Rudge was in San Fran, and here he is, delivering his intoxicating speech about drugs and PKD... "Methedrine!" he wrote. 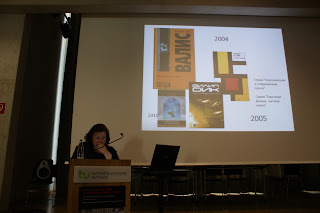 From Russia with Love. Uh, not exactly Russia. And yet... 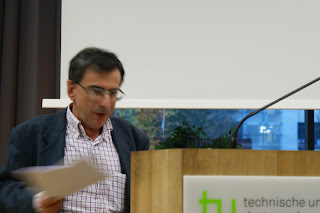 Another big shot of Italian Dickdom... Dr Salvatore Proietti, tenured assistant professor, translator, sf buff, total Dickhead... and a little blurred here, but he had his scramble suit on. 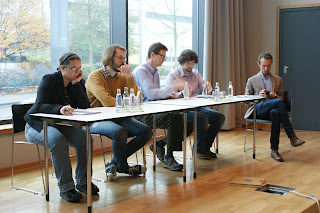 That last, desperate, unyielding, suicidal panel. We were almost done for, but these folks saved the day. I do hope to meet them again in the Orange County Festival, with all you Dickheads. And we'll have the Irvine Integration. No mean feat, believe me.

Stay tuned for Erik Davis's recollections of the event...