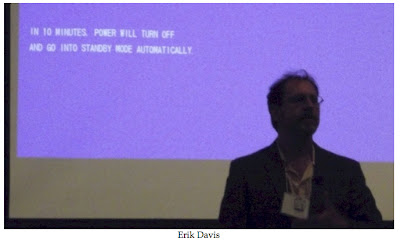 Erik Davis (pictured above amidst the entropy) was nice enough to write a very thorough write up of the recent Dortmund Conference. Actually he wrote it almost two weeks ago, but then my family and I succumbed to the flu and are only now returning to full capacity. In the coming days I'll tell you a bit about my experience reading Nick and the Glimmung to my seven-year-old daughter. Take it away Erik,

This year has held an embarrassment of riches for those of us who like to gather and gab about PKD. The 2012 PKD Festival in San Francisco this last September was a wonderful experience, a rare and perfect blend of scholarship and fandom with lots of talks as well as presentations and even belly dances that broke up the yaddha-ya. And last month, a conglomeration of sharp and generous minds and institutions put together Time Out of Joint: Re-Imagining Philip K. Dick, a conference that, while certainly more academic, was just as friendly, enthusiastic and engaging as the Festival. Held at Dortmund University in Germany, in one of the most modern buildings of this rather ancient institution, the conference featured over three days of non-stop talks, screenings, and performances.

Though Norman Spinrad was unfortunately held up in Paris with VISA difficulties, the conference hosted a number of ace keynote talks. Umberto Rossi followed up his 2009 article about radio in PKD with a wonderful and funny account of television in Dick's work, a darker but still ambiguous tale of media saturation and the commodification of the imagination. Lawrence Rickels delivered the same dense and cryptic presentation on Germany and the figure of the psychopath as he did at the Festival; hearing it for the second time, I was actually able to follow the whole thing! Roger Luckhurst gave a very insightful and thorough historical account of psychopathology and Philip K. Dick--not just Dick's own fascination with schizophrenia, paranoia, and other disorders, but the constantly changing character of those categories over time. For me, Luckhurst's presentation was one of the most helpful of the whole event, as he illuminated the tendency that many critics have (and that Dick shared himself) to try and diagnose the author. As someone writing about Dick's "nuttier" side, this discussion gave me the helpful perspective that Dick's peculiar mental life conjures up so many possible diagnoses that the effort is frustrated from the get-go. Diagnosis, like everything else in Dick's world, is a moving target, a feedback machine with a life of its own.

The rest of the conference talks and panels were solid and sometimes excellent, with many younger scholars represented, showing that there is a lively future in store for PKD studies. There was also a wide range of topics addressed--not just the more established discussions of android ethics and other topics in Do Androids Dream of Electric Sheep? (though these were present as well), but also talks on nostalgia, autism, drugs, and the under-appreciated Galactic Pot-Healer, a personal fave that Matt Englund opened up into a discussion of Dick's meta-fictional labyrinth of readers, authors, and texts. As one of the editors of the Exegesis, it pleased me to see how many presenters were using the recently published volume to put forward their (characteristically divergent) takes on PKD, ranging from neurology (Jason Ellis) to religious studies (oh wait, that was me). James Burton had the good graces to deliver a different paper than he did at the Festival, and his analysis of the shift from exegesis to ecology  makes me even more excited about his forthcoming (if ambitiously titled) book, The Philosophy of Science Fiction, which looks at PKD in light of the religious philosophy of Henri Bergson. But Dick himself was not (just) a religious philosopher. Some presenters, including Yari Lanci--who drew attention to some of PKD's neglected 50s work in his discussion of the neoliberalist foreclosure of time--also reminded us of the continued value of more leftist and materialist approaches to Dick.

Luckily the conference did not drown in academic discourse. In her wonderful Scottish brogue, Fabienne Collingnon presented a cultural history of "cold pac" that was as poetic in its expression as it was intelligent in content. Dutch documentary filmmaker David Kleijwegt showed his new and lovely PKD doc The Owl in Daylight. While most of the faces and concepts will be familiar to Dickheads, Kleiijwegt's editing, soundtrack, and atmospheric, occasionally haunting camera work puts this doc far beyond the usual talking-heads grind, and made me want to see his 2008 film about the indie-rock band Low. The conference also hummed with more fannish enthusiasms as well. One panel devoted to PKD adaptations included co-organizer Stefan Schlensag's passionate dissection of Tony Parker's Androids graphic novel, while Irina Novikova's gave a literally eye-opening overview of PKD translations in Russia (what amazing covers!). One of the conference organizers, Damian Podlesny (a gentle soul from Poland), joined Tommi Brem to discuss a variety of projects, including Brem's ambitious online wiki-index of Dickeana, which readers of this blog will certainly want to check out (http://www.appendix-dick.com/).

Along with the superb hosting from Walter Grünzweig and his colleagues and students at Dortmund (who kept us rigorously caffeinated and snackified), these presentations--as well as a number of stand-outs I did not mention--makes it a safe bet that a good time was had by all.  The only question on people's minds after the closing talks was not whether there would be another PKD conference in the future, but where and when.
Posted by Ragle Gumm at 10:02 PM

Thanks for the great write-up Erik! I hope we'll get to read and maybe see some of the presentations soon.

Thanks for the report, Erik. I wish I was there. I, too, find it exciting that Philip K. Dick fans and scholars are gathering all over the world and look forward to great events in the future. Pleased, too, am I that PKD is doing well with new generations of readers. I look forward to seeing you again in the near future and finding some time to chat. And congratulations on Rice beating Air Force!
My own writeup of the San Francisco Fest is here: http://www.philipkdickfestival.com/files/2012/PKD2012writeupFull.pdf