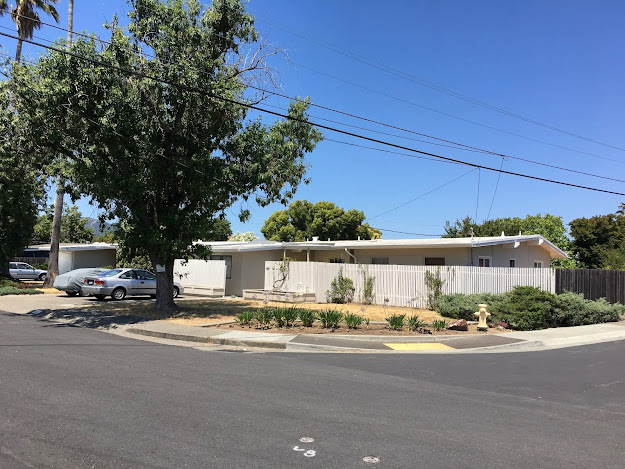 It's hard to believe that even after living in the Bay Area for more than twenty years, and having scouted out almost every one of PKD's houses, I had never been to the infamous "break-in house" near San Rafael, California. That is until today. 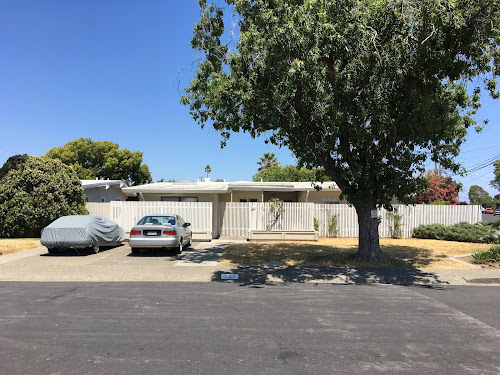 Thanks to Waze, my kids sat in the car as I snapped shots of the house from the street, wearing my covid mask. I'm sure the sight of masked dude taking pictures of the house with a handheld computer really freaked Phil's presence out in his timeless haunting of his old haunts.
Like all of the previous PKD homes I've been to, there is something underwhelming about the experience. These locations never seem to hold any residual magic that I can pick up on. They're just houses.
In this case, I was struck by just how much the neighborhood embodied the California suburbs. They don't have sharp, ninety degree angle curbs; they have the rounded edge that you could ride on your bicycle or skateboard like it was a tiny little wave breaking on the beach. The asphalt has gaps in it where yards and houses are planted.
About the house from my previous post on the residence:
According to Sutin's bio, PKD's mother Dorothy and her husband Joseph purchased this house in their name because of Dick's poor credit. PKD, wife Nancy, and daughter Isa, moved in in June of 1968 (40 years ago). Sutin writes:
"...it was a suburban tract house with a lawn and a garden that did not thrive under new ownership. Grania Davis, who visited with her husband in 1969, received a Phildickian tour of the garden: "He took us around saying, 'This is the dead lemon tree, this is the dead rosebush, this is the dead lawn. The Unwelcome Wagon is coming to pick me up next week'"" (158)
Anne Dick describes the house (in remarkably similar language) in her memoir The Search for Philip K Dick which she wrote before Sutin wrote his bio of PKD:
"When Grania and Steve Davis came over to see Phil, he took them on a tour of his house. He told them, "This is my dead lawn. Do you want to see my garden? " He took them across the lawn and said "This is my dead tree." He took them to another spot in the yard, "This is my dead bush. I'm afraid pretty soon the unwelcome wagon is coming for me.""
In November of 1971 the break-in happened, and PKD's large wall safe was blown open with explosive charges. Read all about it in Paul Williams' article The Most Brilliant Sci-Fi Mind on Any Planet.
PKD left the house sometime around February 1972 (the month and year I was born), headed for a SF Convention in Vancouver, where as Sutin writes, "Phil tried his hardest to die."
If I'm reading the real estate website correctly, the house hasn't been sold since 1972. My guess is that that would be right after Dick moved out. Can someone with more real estate savvy confirm? 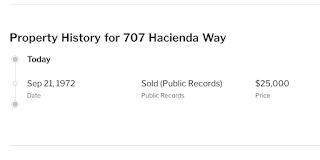 Here's a super grainy shot of the house from the ancient "Philip K Dick Slept Here" website -- what happens to websites when they die? 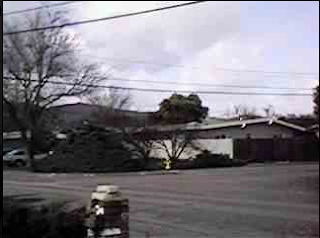 I also spent some time in Point Reyes yesterday and will post my pictures of Anne Dick's house there tomorrow.
Posted by Ragle Gumm at 11:06 PM

Quite off topic, I know, but I'm about your age (also born in 1972), from Belgium, and when I was about 20 - basically as early as I could - I went on a kind of PKD-themed pilgrimage to California. Went to the archives at Fullerton, copied a couple of manuscripts by hand, and tried to drive by a couple of houses he lived in in the Bay Area (Point Reyes and Berkeley basically ).
One house that really moved me was the one in Berkeley, close to the Lucky Dog pet store (and the lucky dog pet store itself - apparently, in 1992, its maanger hadn't ever heard about how famous he was in an odd sci-fi writer's biography).

Anyhow, I'm rambling here, and due to the patriot act, I cannot set foot anymore on US soil (kind of phildickian paranoid story, isn't it?) - which is not a tragedy for me, except for being unable to visit PKD-related places. The only one I can go to is Metz ;-)

In two words, I just wanted to thank a fellow dickhead for sharing this.