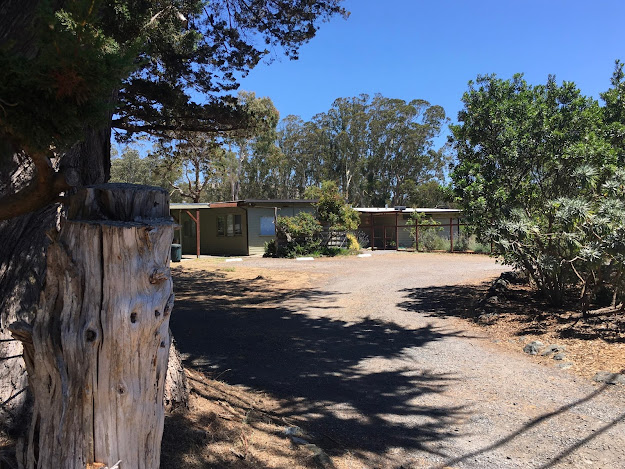 I took my kids up to the North Bay last week and on the way home I checked out the "break-in" house in Santa Venetia. But the whole trip was a little weird. In heading up to Lagunitas, I found myself retracing the old route I used to take to visit Anne Dick in Point Reyes. It's probably been a dozen years since I was up there to see her.
Anne Dick died in 2017. Here's her obituary from The New York Times (sorry about the paywall).  I liked Anne a lot; you may already know that I wrote the intro to her memoir. Last I heard that book had recently been translated into Turkish. I really respected Anne's opinion. She was a force of nature, and I considered her a friend (she considered me a variety of things, some good, some bad, but somewhere in there I think she considered me a friend too). 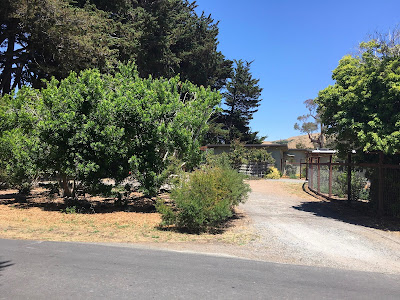 So while I was driving my kids through Point Reyes on our way to a cloudy, cold, and crowded parking lot at Limantour Beach, I decided to drive by Anne's old place.
It's still there, though it doesn't appear to be a bed and breakfast anymore. The house sold in 2018. I wonder if it was advertised as "the house where The Man in the High Castle was written" - cuz it was. It was also the locus for Martian Time-Slip, We Can Build You, Dr Bloodmoney, Now Wait for Last Year, The Simulacra, and The Three Stigmata of Palmer Eldritch, to name just a few.
In my opinion Dick's time there (1959-1964) was his first real masterpiece era, when he seemed to come into his own and blossom as a writer, putting out one fantastic book after another (with only a couple of stinkers in there). If I could get into a time machine and go back and interview PKD at any point in his life, I would set the controls for 1962 or 63, and head up to Pt Reyes to meet "Country Squire" Phil.
Of course Anne and Phil's marriage was famously rocky, and littered with unpleasantness of all varieties. But there were good times. I still remember Anne telling me about this vernal pond that appeared on the property every winter through spring. The family would take blankets out and eat fudge and listen to the frogs. That really struck me, and the mental image stayed with me.
I couldn't help but notice, in the field of dry, dead grass next to the house, a small patch of lupin where I think the vernal pond usually formed. I talk a lot about simile and metaphor in my classes, and I think my mind is especially wired to obsess on symbols. So this patch of lupin kind of got me in the feels. What a nice metaphor for the good times that live on in some way.
I've never been able to pinpoint the location of the little shack on the far side of the field from the house where Phil wrote, which he endearingly referred to as "the hovel." Can you imagine if that was still there? This old wooden shack, covered in spiderwebs, falling apart at the final stages of the entropic process, and you could stand in there, and there was a desk or a counter or something where you know Phil had his hi-fi and his typewriter set up, where he sat for hours, everyday, plodding away at some of the deepest science novels ever written. Who knows, maybe it'd just be a gross shed that couldn't hold my attention for more than five minutes.
I don't really know how to engage with this stuff anymore. I'm not sure it's a good idea for a fan/scholar/critic/whatever-I-am to be engaging with this subject matter emotionally.
But one thing I've learned from Dick's books is the idea that our emotional engagement with the world is always realer than our intellectual one.
So I'll just note that all this makes me a little sad. The good news is that I no longer feel the need to go all the way down the rabbit hole.

It's also possible that's not the location of the vernal pond at all, that I've just built myself a little fantasy because it satisfies the poetics of my narrative. Phil Dick also taught me how to check myself.
Posted by Ragle Gumm at 11:10 PM

Thank you for this. I just finished re-reading Sutin's bio and these add'l details
and your missive are lovely.
I read Sutin the 1st time when i was writing my grad thesis about PKD but i feel a got so much more out of it this time.
I nodded in recognition at your comment about putting a sign about PKD on his one-time residence Pt Reyes. When i lived in Berkeley i went on a campaign to have the Berk. historical society put a plaque outside his house on Francisco Street, which i walked by often and gazed at. In the fullness of time I realized the plaque was a bad idea. The new inhabitants are entitled to privacy, and if people want to know this info they can find it.
You didn't ask but i'll give you my 2 cents, i do think it's okay to engage with all this emotionally, and phil's quote at the end of your piece says it all.
Loved your personal reminiscence, thanks for sharing
Maureen

Hi Maureen,
Funny you mention the Francisco St house. About a year ago I took my family to see it as we were driving around Berkeley, and the guy who lived there walked up the front walk. I said, "Excuse me, I know this is weird but I'm a Philip K Dick scholar and fan (he had heard of the blog!), would you mind if I came in and looked at the inside for just a second?" Which he let me do. Very nice guy, he does have the plaque, but it was inside as they were doing some refinishing. Very nice guy, very interesting to see the inside of the house. But I used up my imposition coupons for the next ten years!

I grew up in Point Reyes and can confirm there is a frog pond that sometimes appears right where you took your picture. It can be very loud in the evenings with hundreds of croaking frogs.

Have you also seen Dick's original Point Reyes house on Lorraine Ave before he moved in with Anne? I was babysat there as a young child since I lived a few houses away down the street. One of the few memories I have from the place is watching Rainbow Bright on a small TV in the living room with a rainbow being shot like a pink laser.

I only recently found out this was Dick's original home. I knew he lived in town and knew Anne as a fellow local but was not aware he had another place beforehand so it was a very strange coincidence.