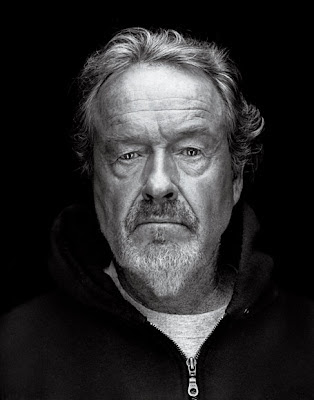 There's a pretty lengthy interview with Ridley Scott about Blade Runner over at Wired.com. Maybe it's me, but he seems like he might be just a tad egocentric. I was worried we were going to have to read a lot of stupid articles about how extensively PKD's novels and short stories have been adapted in connection with this final cut of Blade Runner - but not if Ridley can help it:

Wired: Is it true that you didn't read Do Androids Dream of Electric Sheep?, the book on which Blade Runner was based, before making the movie?

Scott: I honestly couldn't get into it. It's so dense, by page 32 there's about 17 story lines. So one of the problems is distilling it down into a three-act play that can be filmed. Fancher did that with a script he called Dangerous Days. Deeley came to see me when I was mixing Alien and said, "Do you want to do another science fiction?" I said, "I don't really want to go down that route if I can avoid it." But, to cut a long story short, eight months later, the script stayed with me. So I went back to Deeley saying, "You know, we can expand this into something more spectacular if we push it outside onto the street and create a futuristic urban universe." I could never shake loose the fact that I was a designer — which I'm constantly criticized for, and I really don't give a shit.

OK, I can see not reading the book a movie was based on. Blade Runner really is a long riff on Do Androids Dream of Electric Sheep? rather than a faithful adaptation, but then Scott takes credit for the noir feel of the movie:

Scott: Well, people want a comfortable preconception about what they're seeing. It's a bit like 20 years of Westerns and, now, 45 years of cop movies. People are comfortable with the roles. Even though every nook and cranny has been explored, they'll still sit through endless variations on cops and bad guys, right? In this instance, I was doing a cop and a different bad guy. And to justify the creation of the bad guy, i.e., replication, it had to be in the future.

Actually he puts it in the passive, always a bit of a rhetorical dodge - he doesn't take credit for the noir feel but he doesn't give PKD credit for it either. And that's a problem. Arguably, the noir feel of Blade Runner gave birth to the cyberpunk movement, and in my mind, that credit should go to PKD. Do Androids Dream of Electric Sheep? read like The Maltese Falcon long before Scott put Harrison Ford in a trench coat. The dialog in DADOES? is pure noir. Whatever, Ridley seems a bit out of touch. Sometimes when I look at his picture quickly, out of the corner of my eye, I can see his metal teeth. Take us home Ridley,

"But at the end of the day, there's a lot of me in this script. That's what happens, because that's the kind of director I am. The single hardest thing is getting the bloody thing on paper. Once you've got it on paper, the doing is relatively straightforward."

Sounds like a line from Blade Runner, "If only you could write the script that I wrote based on that novel."
Posted by Ragle Gumm at 9:37 PM

I dunno about that, William Gibson claims he left the theater in the middle of *Blade Runner* because it was too much like the stories he was already writing.

"out of the corner of my eye, I can see his metal teeth."

I thought about you when I read the interview with Ridley Scott in the NYTimes Arts & Leisure section today, in which Scott says Deckard was always a replicant.

For a chap whose background is in advertising, he doesn't do a great job of selling the Blade Runner 'ultimate DVD collection' or whatever it's called. But then he probably doesn't need to.

Having become adickted to BladeRunner the first time I saw it in a cinema, I soaked up every article on the movie, and every interview with Scott, I could find over the next two decades.

Scott's enthusiasm for the film has clearly grown as fans have vaulted it up to icon and legend status.

He didn't always thin the film was an artistic success. Good to see him realizing the reality now, if somewhat belatedly.

Once the 25th anniversary of BladeRunner is out of the way, are we ever going to see a faithful adaptation of DADOES? Perhaps as a six hour, three part, HBO miniseries or something? BladeRunner is BladeRunner, but Electric Sheep is something different altogether and still a tale worth telling, in full.

give me a break, the guy busts a nut to make the best future film to date (my opinion) and you read things into his comments, you lot dont know squa.

By the way I hate bloggers your always full of crap.

Have a good xmas!