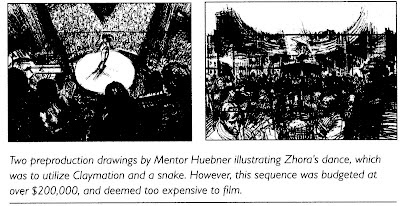 I've got a pretty good idea what scene they've added to Blade Runner for the Final Cut, but if I don't get these predictions on the Internet before it opens in theaters in LA and NY this Friday how will I ever prove I'm a pre-cog?

I've been skimming a copy of Future Noir: The Making of Blade Runner, which is a great book, with way too much information for someone as busy as I am these days. According to the author, Paul M Sammon, Scott always intended to include Zhora's act with the replicant snake in the film. Apparently, the scene was too costly to shoot, and so it was scrapped.

Based on what we know it seems likely that this is the scene that has been added to the Final Cut. Here's my evidence:

1) The only obvious new footage in the trailer for the release appears to be a dance number.

2) Joanna Cassidy was brought back to reshoot some stuff during the production of this cut.

Joanna Cassidy says this an interview in Future Noir:

"Zhora's dance number was going to take place on this elevated platform covered in sand dunes... First you'd see little rivulets of sand starting to break off down one of the dunes like they were being blown away by the wind, then the camera would pull back, and those particles would coalesce into a human form - me. I'd step away from the dune and reach a towards a snake coming out from underneath the sand."

You read that right in the caption; they were going to use Claymation to film this. Preliminary versions of the script called for the scene to be shot in an abandoned opera house, which would have been a nice touch to resonate with Do Androids Dream of Electric Sheep?. Remember Deckard and Phil Resch meet Luba Luft (clearly Zhora's counterpart in the novel) at an opera house where she's rehearsing "The Magic Flute."

A bit of trivia: The replicant snake was played by Cassidy's own four-year-old Burmese (Myanmarian?) python, Darling.

According to Sammon, the stage was even built for Zhora's number.

Will this add anything to the movie? Possibly, after all, remember that Zhora is dancing with a snake. The MC that introduces her says, "Ladies and Gentlemen, Taffey Lewis presents Miss Salome and the snake. Watch her take pleasure from the serpent that once corrupted man."

Are biblical references in this film significant to hardcore academic fans of the novel and movie? Yeah, a bit. I'm being sarcastic; this is the kind of stuff our dream dissertations are made from. Shakespeare references are fun too!

But seriously, as long as this isn't like that green, California-raisin-looking singer (who's actually named Sy Snootles - blech!) that Lucas edited into his re-release of Return of the Jedi, I'll be happy. 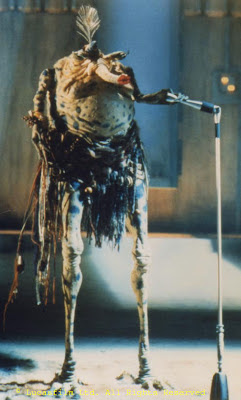 Well of course, the snake dance and hospital scenes are noteable for possible conclusion because (I believe) they were in the workprint, which suggests they wanted them there in the first place.

After reading the transcript from the Wired interview, I'm more worried about what gets REMOVED from the movie. If I read that right, I think he was implying that the telephone booth scene in the beginning has been cut? Did I read that right? If so, that sucks, I personally don't want to see anything cut, but whatever, at least we get all versions with the new DVD set! -SMILE-

Joanna Cassidy was brought back in for reshoots, but I think it was only for some face close-ups, to be CGI-ed onto her stunt double running through the glass windows when Deckard wastes her. I think I read that Ridley Scott's son shot those.

Of course the snake dance being included would be interesting, and there were new dancer shots in the trailer.

Apparently the special effects, particularly in the opening scenes, were 'deepened' and are now mind-blowingly beautiful. Even more so. Can't wait to see it in a cinema again. 25 years have passed by "like tears...in the rain".

I believe the correct adjective would be Myanma.