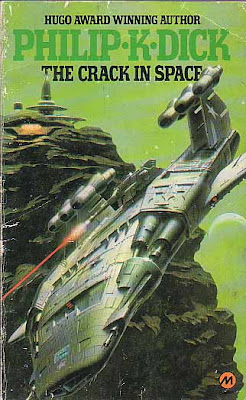 You know what that means.... Time to read The Crack in Space!

"On a future Earth (c2080 CE) overwhelmed with severe difficulties related to overpopulation, a portal is discovered that leads to a parallel world. Jim Briskin, campaigning to be the first black president of the United States, believes that the new "alter-Earth" could be colonized and become a home for the seventy million people that are being kept in cryopreservation. Known as bibs, these are people - mostly members of ethnic minority groups - who decided to be "put to sleep" until a time when the overpopulation problem is solved.

Briskin is a social conservative, who does not support the Golden Doors of Bliss orbital brothel, and opposes widespread abortion access. There are two dominant US political parties, the "Republican Liberals" and the "States Rights Conservative Democrats" who run CLEAN, a racist frontgroup that opposes Briskin's candidacy, although higher income white American voters support him. Terraforming becomes a pivotal election issue, until a warp drive malfunction results in the discovery of an apparently uninhabited alternate world, an 'alter-Earth' where homo sapiens never evolved, or lost in competition with other early hominids. In this case, the point of divergence appears to have occurred between one to two million years ago, as homo erectus, also known as sinanthropus/pithecanthropus or Peking Man, is the dominant species. In reference to the latter designation, the explorers refer to the indigenous hominids of this world as "Pekes.""

"The Crack In Space is a good example of how Philip Dick is able to raise a lofty philosophical issue in the context of a dramatic and imaginative story. While the events move by at a frantic pace and are filled with suspense and creativity, one is never able to ignore the intellectual complexity of the circumstances or the consequence to the (existing) human race if these events were ever to unfold. Hidden among the futuristic mutants, instantaneous space and time travel and portals to alternate universes the message of The Crack In Space deals with the unlikely way which human history has unfolded."

Perhaps this is the Philip K Dick novel we're living in now!

You know I don't remember this book. It may be that (gasp!) I've never read it. Let's put a stop to that. In fact let's read and the discuss the book together. I'll start tomorrow..... Who's with me? Think we can't do it? YES WE CAN!

Labels: First Black President, Jim Briskin, The Crack in Space, Yes We Can

Was Dick making a statement about race relations in America by placing the story in 2080?

I read the book years ago and I remember it not at all except that I considered it as one of Dick's weakest efforts...probably only marginally better than his two worst: VULCAN'S HAMMER and DR. FUTURITY.

I've read quite a number of Dick books more than once, so I guess I should try to get through all of them at least twice. It'll be interesting to which (if any) I like better on second reading...and which ones not as much!

Obama may turn out to be Jim Briskin, as opposed to the combination of MLK and JC he appears to be at the moment. As to Crack, I think it's another forgotten classic - the idea that a prehistoric foreunner of homo sapiens could develop on an alternate Earth and come up with telekinetic powers and flight based on compressed ice (amongst other things) is great in itself - add in the 'my god, what if?' of the growing world population and we have a winner. And everyone likes a winner.

Ha, my first inclination was to say 'Are you calling Obama a clown?'
Oh... not that funny.

Anonymous, no statement about race relations, he simply inverted the 0 and the 8.

I have always loved PKDs early work including Crack in Space. Dr. futurity and Vulcans Hammer. They were great reads, action packed with nice twists. Not literary giants as Scanner and Ubik are but fun. I think Valis and Divine Invasion were much harder to read and way less enjoyable than the early work but maybe i am too simple minded.

I am always interested in buying any signed or inscribed PKD items (books, letters etc). I offer TOP Dollar for any nice Dick item. i have a nice collection and would love to share images of it with anyone who is interested. if you have something to sell or just want to see some cool PKD send me an email. Thanks-Paul at: garciajones@yahoo.com

We will not forget Ferris F Fremont
http://mixtapewormweb.bandcamp.com/album/a-hole-in-capitalism