Helping Out the Internets! 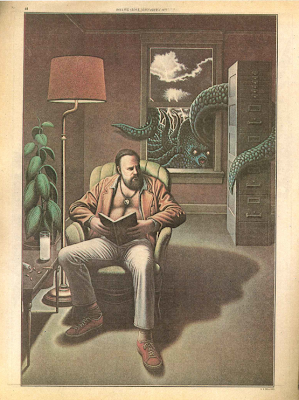 First the paid aggregators over at Boingboing dug up Paul Williams' 1975 interview with PKD and posted a link on their site. I chimed in with some additional information about Kent Bellows' illustration:

"Excellent find! This is a fantastic article, probably the best ever written about Philip K Dick. Williams’ interviews (which he eventually collected in a book titled Only Apparently Real) capture Dick had his bullshitting best. In the book Dick even tells Williams that the amphetamines he had been taking for years had been filtered out of his bloodstream by his liver before he even got high!

But I wanted to add some information about the illustration, which was done by GK ‘Kent’ Bellows, who was given the assignment by his friend, Greg Scott, an assistant art director at Rolling Stone. Scott wrote in an email regarding the picture:

“Paul's accounts of the break-ins plus Phil's general paranoia led to Kent's idea of an alien sneaking into Phil's house. The tentacled monster was inspired by the 50s movie 'It Came From Beneath the Sea' (Google image search for it, you'll see a few stills of the monster).

Kent always did extensive photo research for his paintings, thus, his chair, lamp, rubber plant, and so forth were used for props. Personal photos of Phil that were provided by Williams inspired the open corduroy jacket, hairy chest and necklace….Kent himself did model for the body, posed in the chair, and yes, I do think that there was a somewhat vicarious self-portrait lurking within the whole idea. Like Phil, Kent was an artist; he used drugs to enhance the creative process, had tempestuous relationships, an unusually wild imagination, etc... There's no question that Kent identified with Phil on many levels.

(Later, Kent was obsessed with self-portraits in general... which you may have gleaned from much of his work that can be found online).”

Kent, who unexpectedly passed away in 2005, was a huge PKD fan. Dick very much liked the portrait, and, in fact, met Kent and even officiated an informal marriage ceremony for Kent and his girlfriend Liz. Check out Kent’s work here. And order Williams’ book here. "

Then, yesterday, the paid aggregators over at io9.com got a hold of the interview and zeroed in on this quote from PKD:

"With High Castle, and Martian Time-Slip, I thought I had bridged the gap between the experimental mainstream novel and science fiction. Suddenly I'd found a way to do everything I wanted to do as a writer. I had in mind a whole series of books, a vision of a new kind of science fiction progressing from those two novels. Then Time-Slip was rejected by Putnam's and every other hardcover publisher we sent it to.

My vision collapsed. I was crushed. I had made a miscalculation somewhere, and I didn't know where. The evaluation I had made of myself, of the marketplace, went poof! I reverted to a more primitive concept of my writing. The books that might have followed Time-Slip were gone."

Of course, Williams and PKD biographer Gregg Rickman have pointed out PKD is misremembering Martian Time-Slip as following The Man in the High Castle. In fact, Dick wrote We Can Build You immediately after TMITHC, and it's a much better fit for the novel PKD is describing in the interview. In fact, We Can Build You is one of my favorite PKD novels. While some fans feel the novel moves too slowly, I enjoy the pacing, which I would call Pastoral SF.

Of course my long-time readers remember my semi-regular, self-righteous tirades over schlocky PKD reporting like this when the blog first started. What can I say? I'm mellowing....

"I wrote [We Can Build You] while I was trying to fuse my mainstream stuff with my science fiction stuff, so it's not quite science fiction, in the usual sense of the word. Finally Ted White [the then-editor for Amazing Stories], who knew of the existence of manuscript, asked for it so he could publish it in a magazine. Ted added a final chapter to it, because -- as it well know -- writers are incapapble of writing their own books. (...) If it wasn't for kindly editors, who are your best friends, who'll help you out by adding another chapter, or removing one here or there, or turning one inside out, or changing all the names or whatever, you'd never have gotten off the ground" (as printed in Pink Beam: A PKD Companion 107).

Regardless, We Can Build You should be noted as a significant milestone in PKD's career, as he was able to successfully (at least in my opinion) combine intense character study (of dark haired girl Pris and her relationship with protagonist Louis) and a SF story about a manufacturing firm that begins manufacturing simulacrum to avoid going out of business.

Lord RC, however, disagrees, writing in Pink Beam: "We Can Build You, then, cannot be said to be a successful melding of science fiction and mainstream writing. In this novel PKD scrambles through the science fiction aspects in his rush to explore the relationship between Louis and Pris. And this relationship is, like many in his mainstream novels, about as gloomy as you can get."

Read the book and decide for yourselves.

Do you have any idea what happened with the Gorin film adaptation of Ubik? JP is a professor at UC San Diego now (I took his film history class) and I had no idea he'd attempted it!

Awesome post, TDH. I gotta say though that PKD's words ring true for me, in that Time-Slip is (in my opinion) most akin to High Castle than any other work, by virtue of his really DIGGING into an ensemble of characters, and allowing the plot of the book to hinge on character development and relationships. It's prose is some of the most refined of his career, and feels very much like the work of the man that wrote High Castle, and felt himself to be creating a new sort of literature.

Nice to hear an appreciative take on We Can Build You. It makes me excited to read it now. (It's one that often seems to get skipped over and dismissed, if not outwardly maligned.)

I remember reading Ted White's account back in the pages of AMAZING Magazine in the early 70s as to how he added--or changed--the ending to Dick's book, which was serialized as A.LINCOLN, SIMULACRUM. White laid out the background of his acquaintance with Dick, including one instance in which they colluded to have a photo of White placed on the back of one (British?) paperback edition of MAN IN THE HIGH CASTLE, identified as the author of the book. A sort of Dickian jape on identity. Anyway, White, as I recall, felt the ending of the book petered out or maybe simply stopped, with no real ending. He claims he had an idea of a proper way to end the book and he asked Dick if it would be alright if he (White) added the ending. I don't believe it was an entire chapter, but it's been decades ago, so I be wrong. White says Dick happily acceded to the suggestion. White says it was only later, when he found himself being frozen out by Dick, a former friend, or friendly acquaintance, that he realized Dick had taken offense. White's complaint is that Dick never was forthright and told him about his resentment at White's authorial interference. White, as I recall, went on to detail other less than admirable acts/behaviors of Dick that revealed his more petulant and childish side.

I wish someone would find and reprint White's account.

Anyway, We Can Build you is definitely one of PKD's best... http://penultimatetruth.blogspot.com/2008/03/we-can-build-you.html

somewhere among all of my books and papers, I have a postcard that the illustrator sent to Phil -- it includes a little proof-size b&w photo of Bellows as Phil
~~~