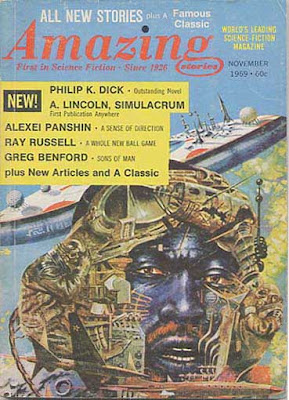 Yesterday, I posted a long excerpt from a PKD interview, during which Dick goes off on Amazing Stories editor Ted White. Read that here. At least one commenter requested an airing of White's side so here it is. White responded to Dick's allegations about We Can Build You in a letter to the Philip K Dick Society Newsletter:

"I've been wondering when the Appel/Briggs interview with Phil Dick would crop up in the newsletter. I was shown a copy of this interview in ms. form in 1979 or 1980 and I was disturbed at the time by the wholly erroneous description of the events surrounding the publication of We Can Build You in Amazing as "A. Lincoln, Simulacrum." I write now in an effort to set the record straight, although my disappointment with Phil has worn off since his death.
[...]
I'd heard about the novel, as he says, from someone at Scott Meredith - maybe from when I worked there (1963), or perhaps later, I no longer recall -- and when I became editor of Amazing I asked for it. Scott was glad to send it out; it had been unsold for ten years by then, perhaps the only remaining unsold SF property of Phil's. I read it and realized what the problem was, and I asked Phil about two things: changing the title (to "A. Lincoln, Simulacrum," my choice) and adding an ending. Now to put this into context I must point out that I had met Phil in 1964, lived in his house, had him read the I Ching for me (a startling experience, the validity of which I believe to this day), and had been publicly described by Phil as the man who knew his work and understood it best. In 1965 or 1966 he had given me the first fifty pages and the synoptic essay for Deus Irae and asked me to finish it for him. In other words, this was a man who professed admiration and respect for me and wanted me to collaborate with him. (As a jape, he gave Penguin a photo of me and it was printed [as a photo of the author] on the back cover of the British Man in the High Castle. [Any readers out there with a copy of this edition, please scan the back and send it to me!]

So I called Phil up; he had no objection to my proposed title change and suggested I write the ending of the novel. I counter suggested that I write a first draft and send it to him for him to rewrite, and he agreed. So I wrote somewhat off-the-wall final chapter in skeletal form. I expected Phil to reject it out of hand or rewrite it and flesh it out. He did neither. He returned it to me with three words changed and praised its economy.

As far as I knew when I ran "A. Lincoln, Simulacrum" it was in a form satisfactory with Phil. Because I considered myself a friend of Phil's, I tried to do more for him. I knew the novel had been rejected for every market that had seen it, and that undoubtedly included Ace (his original publisher), but ten years had passed and now it had an ending, so I gave a copy to Terry Carr, who was then the editor of the Ace Specials. He didn't like it, but passed it on to Son Wollheim -- who had rejected the original version -- who also refused it. However, after Don went to DAW he must have had second thoughts, because he bought it for DAW and published it under a third title, We Can Build You, sans my ending."

So here's the thing. PKD and White seem to agree about the facts. It's also obvious Ted White was really bummed out about PKD's comments. But I was listening to a recording of that interview between Appel and PKD and Appel sounds really young. It's him and another guy and they're both totally fanning out on Philip K Dick - and he's clearly loving the attention. If you look at PKD's language in that quote, he's clearly milking the story for all it's worth. It's a shame White took the comments so personally, and that this incident is often pointed to as an example of PKD's exasperating demeanor. I think it was all in good fun and perhaps PKD is guilty of being impolitic rather than 'difficult.'

So if anyone has the Penguin British edition of We Can Build You, or that anthologized version with White's ending, please scan them and send them. They warrant further study.

Update: Reader Bruce Berls kindly scanned the back cover of the British Edition of We Can Build You. That's apparently Ted White pictured. 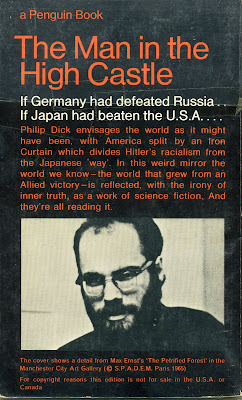 Double Update: Henri over at The Philip K Dick Bookshelf, points out the obvious, this is the back cover for The Man in the High Castle, not We Can Build You, and this is consistent with what White says. Thanks for keeping it "real" Henri!
Posted by Ragle Gumm at 4:08 PM

Labels: Amazing Stories, PKD Interview, We Can Build You

I'm so sorry that Ted White felt hurt about Phil's comment. To be fair, Phil was much more seriously ill than any of us knew. He had suffered an acute attack of non-alcoholic pancreatitis a couple years before I met him, and that made his life miserable. Even Phil didn't understand that his health was permanently compromised. I will not outline the symptoms, except to say that he could no longer digest his food properly. Phil always told me how grateful he was that Ted White championed We Can Build You, a wonderful little novel that other editors had rejected.
~~ Tessa
~~~

A fascinating set of posts, TDH.