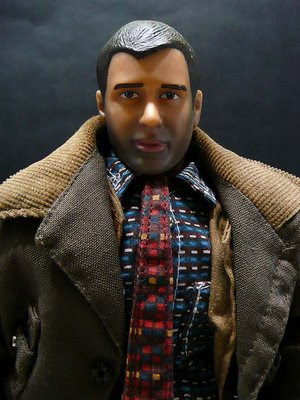 io9.com recently detailed plans underway by Ridley Scott and his brother to develop prequels for Scott's 1982 magnum opus Blade Runner. That sensation you're feeling is, I believe, cynical trepidation. But there's hope: YOU (riders of the Intertoobz) will have direct control over these webisodes, as you'll be voting on the plot points.

Some paid person at io9.com writes:

"Scott, along with his brother Tony and son Luke, are teaming up with the independent studio Ag8 to produce Purefold. Ag8 previously produced the British web series Where Are The Joneses?, which asked viewers to write and submit the further adventures of the title characters. Purefold will use a similarly interactive format, as it unfolds in five to ten minute shorts driven by reader input culled from the social aggregator site FriendFeed. Although the series will debut on the web, there is some hope it will ultimately make its way to television."

"The producers of Purefold don't have the rights to Philip K. Dick's original novel, Do Androids Dream Of Electric Sheep?, which provided the basis for Ridley Scott's film. As such, the series definitely won't be featuring any of Blade Runner's characters or specific situations, although I'm still holding out hope we'll finally get to see what's so damn unbelievable about attack ships on fire off the shoulder of Orion. Or C-beams glittering in the dark near the Tannhauser Gate, for that matter."

And, if you thought it couldn't get any stupider, here is the final straw....

"What Purefold definitely will have, however, is product placement, as RSA Films is bringing in a number of advertising and marketing agencies to help secure funding for the project. Considering what happened to companies that had their logos prominently featured in the original film, such as Bell, Pan Am, and Atari - they all went bust - I'm not sure if that's really a good idea."

Is there any way I could vote for this not to happen at all?
Posted by Ragle Gumm at 10:59 AM

That sensation you're feeling is, I believe, cynical trepidation.

I wouldn't sweat it. Does anyone remember Total Recall 2070? No? I thought not. This is just like that, but with even less of a reason to exist, and it'll be forgotten quickly.

On the other hand, the Creative Commons licencing aspect of it is kind of interesting, since it effectively makes fan films based on the prequel legal, and sets up the possibility of a 'shared universe' for anyone who wants to play in it.

Of course *That* won't happen either, but it is at least interesting conceptually. So the legal concept is more interesting than the concept of the story itself.

So many bad things have happened to such a great story. I hate explaining who PKD was to people, and using the words "Blade" and "Runner" next to each other...people immediately get a false representation of every Dick.

Presumably the fan-constructed episodes will be subject to a 'director's cut' at some point in the future. Maybe several.

Christ, this kind of pessimism and snark is getting to be too much even for an asshole like me. Have a little goddamned hope, guys.

You're right, of course, Craig. Such negativity ill becomes us. I do wish these 'movie' people would leave the stories alone, though, and stop seeing those of us who appreciate them as a captive market for anything that has 'adapted from the story by Philip K Dick' in the credits.

When has filmmaking by committee ever been a good idea? I guess nobody in Hollywood has ever heard the old saying "Too many cooks spoil the broth"?

It hurts me to say this but it will be a disaster no matter how much I pray it isn't.

Didn't Blade Runner have massive product placement in it anyway? I recall a gigantic Coca-Cola billboard amongst others...