The Duty of Survival 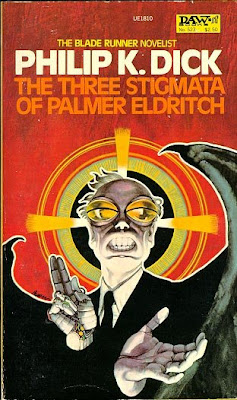 Last semester I taught The Three Stigmata of Palmer Eldritch in a sophmore literature course at San Francisco State University. While I think most of the class preffered the other novels featured, The Maltese Falcon and Fight Club, several students were quite take by Stigmata. I am posting the following outstanding student essay because I think it zeros in on several very important recurring themes in PKD's work: the Universe's paucity of kindness, the refuge of imagination, and the uniquely human moral duty to go on surviving. I'll add only this quote from Ursula Le Guin to the introduce the essay:


Palmer Eldritch – Eternity is not Enough
by David Borac

Among the richness of motives that crisscross Philip K. Dick's novel The Three Stigmata of Palmer Eldritch one of the most striking is the continued human commitment to the ultimate duty of survival. Even though they are trapped in a dystopian world in which the human condition is bearable only through the use of drugs that stimulate the imagination, Dick's characters are still able to find motivations for fighting an insidious alien invader. Their motivations, though for the most part left implicit by the author, form a fertile ground for speculation.

On an overheated Earth, human life clings to artificial support systems as the last defense in the face of a scorching climate. Richard Hnatt sees “with aversion that already it had become too hot for human endurance” (9). Humans have colonized Mars and other planets of the Solar System only to find out how uninhabitable they are. Any attempt at terraforming is an exercise in futility since the colonists look upon “their abandoned, decaying gardens,” covered in dust and populated by mutated, almost unrecognizable, vegetables and feel “the torpor, the hopelessness [claiming] them” (159). Having the status of exiles from the mother world and experiencing no glimmer of hope to light their dreary lives, the colonists are considered to be “unfortunates who, under the selective service laws of the UN, had been kicked off Earth, required to begin new, alien lives” (10). Anne Hawthorne, a one-of-a-kind missionary and agent, summarizes the extent of this paucity in a moment of despair: “Earth is ceasing to become our natural world; and certainly this never will be. We've got no world left! […] No home at all!” (141).

There are few things left to wish for on Earth: living quarters close to work, vacations in Antarctica, where the temperature is cooler, and strange surgical procedures that have the potential to speed up evolution and turn humans into 'evolved' individuals. Such advantages, however, are only for the privileged and the multitudes live hopeless lives over which the fear of being selected for exile in the colonies hangs like the Sword of Damocles. As a result, drugs that create the illusion of living in a better world become an accepted and unique way of deriving a modicum of satisfaction from being alive.

One of the paradoxes of the human condition, that our imagination can control our bodies, underlays the motif of the Can-D drug, which acts as an example of the victory of the id (our desire for immediate pleasure) over the super-ego (our desire for spiritual and moral completeness that drives our conscience). The hovelists on Mars take Can-D because it provides them with instant and effortless gratification, allowing them to imagine themselves as being richer, more beautiful, and more in control of their own existence and environment. Returning to their hovel, however, is traumatic and often makes them even more despondent than before. Protected by her belief in the doctrines of the Neo-American Christian Church, Anne Hathaway is the only one who instinctively recognizes the paradoxical nature of letting the imagination drive the body: “Isn't a miserable reality better than the most interesting illusion?” (143) she asks Mayerson while attempting to consume Can-D for the first time. Leo Bulero, on the other hand, is perfectly aware of the value of human imagination as a major piece of the human condition when he attempts to convince Pia Jurgens to try Can-D by appealing to her powers of imagination: “you look like the sort of woman who has active imagination and the reaction you get to Can-D depends […] on your imaginative-type creative powers” (23).

Since there is nothing left for anyone to live for, the whole fabric of human society should crumble in the face of an attack, much like a weakened immune system. Such an attack occurs when Palmer Eldritch, a reputable pillar of society, returns from an interstellar trip, no longer entirely human and inhabited by a viral entity that seeks to reproduce by propagating its consciousness inside people's selves. To begin infecting people, Eldritch has to gain access to their bodies through a new drug, Chew-Z, that substitutes the real world with a world controlled by the virus. Instead of transporting a person's consciousness into a more pleasant environment, Chew-Z injects its own environment into a person's consciousness, robbing the user of their last hold on the human condition (that of living through their imagination) and forcing them to enter a world where they are at the mercy of an alien creature. So why do people start to resist the invasion as soon as they try Chew-Z for the first time? What have they left to lose? When Mayerson, contemplating Chew-Z on Mars, feels the need for a “way in which [he] can be freed” (187), what type of freedom is he talking about? Chew-Z brings about the final and most extreme dehumanization, taking away the only one thing that people had not yet lost: the privacy of their own minds. Even as Perky Pat and Walt Essex, the miserable hovelists still continue to control their own thoughts; they bicker and gossip and fight over the scenario while in complete control over their very own selves. As an old German song says “Die Gedanken sind frei, wer kann Sie erraten?” (Thoughts are free, for who can guess at them?). One's own freedom of mind is the only freedom that cannot be physically alienated and, for this last island of freedom, some are willing to fight an almost invincible alien invader.

Mayerson likens the condition of a Chew-Z addict to that of a slave: “Once you've taken Chew-Z you're delivered over. […] But what we are missing here is a way by which we can be freed” (187). Leo Bulero, a seasoned executive with an aggressive personality, hopes to rally some sort of a movement of resistance against Chew-Z: “We'll be a guild of Protectors. Saving the rest” (229) Bulero has a down-to-earth fear of anything that corrupts the mind, rendering it incapable of initiative and creativity: “...if this blight had reached Terra, yet. […] And suppose it reaches our minds? Not just the anatomy of the thing but the mentality as well... what would happen to our plans to kill the thing?” (227). Although they recognize the danger that Palmer Eldritch represents, Hawthorne and Mayerson's defenses are weak and they are ambivalent about using any practical means to combat it. Leo Bulero, however, is able to summon more confidence in his ability to repel the invader. Leo's main mental support is his belief that his evolved mind is strong and reflects a power that is God's design: he feels he has “powers implanted in me from the start which I can draw on and beat him with.[...] My evolved mind tells me all these things.” (229) Bulero represents perhaps the last part of consciousness, the self-reflective intelligence, a miracle of life, putting up the last resistance against mental disease. Alert and enterprising, Bulero fights to stay in control even as other structures of the brain, such as memory and recognition, fade into the mire of mental confusion. But at times Leo involuntarily identifies himself with Eldritch and asks Felix Blau: “'Leo'? How come you keep calling me 'Leo'?” (230). Frightened by Leo's mental fog, Blau implores him to think in order to keep his sanity. Leo's promise to stay alert is marred by the evidence of deterioration: “Oh yeah. […] Sorry. I know what you're afraid of. […] I'll keep thinking, like you say. I won't forget again” (230). His proud confidence is now dented by his readiness to accept support from Blau.

An allegory of a single human's battle to remain in control of his own mind, the story of Palmer Eldritch shows that there is no loss more traumatic for a human than the loss of the thought process and that there is no fight more desperate and more hopeless than the one against insanity.
Posted by Ragle Gumm at 12:44 PM

It's frightening to think that our government (and probably other governments) is sponsoring research into drugs like Can-D (candy) and Chew-Z (chewsy), as well a electronic means to read and control our thoughts.
This is a prophetic novel.
~~ Tessa
~~~

That's for after Tessa, when they're done tearing Terra to shreds. Look - we have Can-D! Hop in my van! =)

This is a really excellent essay by the way, I had to read Stigmata twice and with this complementary chrysalis to view it from I could definitely benefit from a third go.

I think it is interesting how Can-D envelops an imaginary world with a subjective imagination while Chew-Z envelops reality with a cold, calculating objective 'imagination' - like two yins or yangs without its complement. If both are signposts to anti-awesome, better get our imagination working on reality real quick! Or get reality working in our imagination? Something like this... or that.

Nice essay, and in the end you are right... all hope is lost. That's the most chilling part of the book, the realization that whatever Eldritch was, he/it was now in control of humanity, or whatever was left of it.

It's my favorite of all Dick's works.

Yes, what a great novel. I'll never forget my experience reading the entire novel sitting in a bookstore in Minneapolis, absoltely gob-smacked at each crazy twist of the plot.

The student essay was fantastically written, although I shy away from readings in which the primary object of study is the protagonist's sanity. Dick's novel also aims at systemic factors that create the conditions for such cognitive and emotional conflict. I've never read a better condemnation of consumer society than that revealed through the Perky Pat layouts. Fierce!

one can only hope to have such good work come from a student.

when I first read 3 stigmata I was in college, and had a terrifying reality breakdown experience when I fell asleep in the middle of reading it. no other PKD novel has quite the same impact.