PKD Segment on The Electric Playground 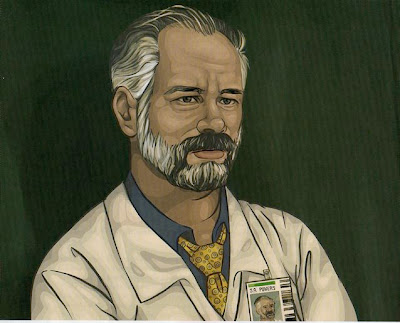 Just got word that The Electric Playground, a website devoted to SF-fandom, is running a short video piece on Philip K Dick's cinematic adaptations. I wish they'd interview me for these things, instead of just telling me they've been posted. But if you want to spend three minutes listening to a couple guys tell you a few things (literally) about Philip K Dick, head on over and take a look.

What would I have said if I'd been interviewed? Something about how all the bad PKD movies have dodgy chairs, and all the good movies capture Dick's themes, but don't necessarily have to stay true to the plot (A Scanner Darkly being the exception that proves the rule). I'd also probably bring up a few points from this article I wrote. Oh, and I'd be sure to mention that sometimes, believe it or not, books are just better than movies, and that the ultimate sign of a story's success is not a cinematic adaptation, but rather a dedicated group of readers who fall in love with their own version of that fictional reality, and who care enough about that world to plumb its depths in search of meaning.
Posted by Ragle Gumm at 10:28 AM

the more I think about Linklater's ASD the less I like it. I think it's a good adaptation but I feel that it misinterprets the novel, gets the humor wrong, and completely misses the spirituality.

Mr. Hand, how do you feel Linklater's film misinterprets ASD? What, in your opinion, is Linklater's take on the novel, and what is your own different take?

I don't know about spirituality, but I know when I saw Linklater's film, I teared up at the ending. (I have read ASD twice, but the last time was 20 years ago, so I had forgotten details of the book, including the ending, and so it was fresh again to me in watching the film...and deeply moving.)

I agree with Robert, I loved Linklater's ASD. I think Linklater is one of the few directors who has adapted one of his stories, that also really gets PKD.

While I think ASD is proof enough, having seen Waking Life before ASD, the comparison of PKD as a modern day philosopher by Linklater is quite obvious. He saves the PKD story for last, and he himself does the narration with the main character (who I will eternally think of as "Mitch" from Dazed and Confused...another Linklater film).

In the end though, the cliche about the book being better than the movie is almost always correct. Are they ever going to be able to take what's in your head and project it on the screen? Wouldn't that really be the only way to satisfy a reader?

I'm a Linklater fan too, and I think he did a great job with A Scanner Darkly. Maybe film adapations will never be as good as the original book, but that doesn't mean it's worthless to do it. It's the obvious example but Blade Runner was an adaptation that, IMO, transcended the original book. Even if you don't think that, it is clearly something different and brilliant in its own terms.

The fact that film adaptions are (almost) never as good as the book, shouldn't be taken to mean that books are better than films either. When have you ever heard of a good book based on a film?

While I think ASD as an adaptation is okay and the ending almost captures the melancholy of the page, I couldn't help but wish that Linklater had left the film as live action instead of animating it, it might have had much more impact. Have to say
that Waking Life is the superior film of the two.

On a completely unrelated note: saw 2012 today and did a double take on a throwaway shot of a pan to a supermarket aisle shelf with rows of plastic soda pop bottles all labeled VALIS! What a strange reference to PKD, in this of all films. Anybody else catch that?

A Scanner Darkly is the only movie that comes close to what PKD wrote. But I do like Blade Runner on it's own, the movie is some far from the book that their almost to different stories.

that man there said...

Maybe a bit off topic but i've never understood how the exception proves the rule.

Wouldn't it disprove/discredit the rule.

But ASD for me is ace,hope the next movie is at least watchable unlike that Nic Cage Next...rubbish.

"The exception that proves the rule" doesn't make sense anymore.
It was used when the word 'exception' was being used in a legal sense.
It's explained here: http://www.phrases.org.uk/meanings/exception-that-proves-the-rule.html

Anyway, if you use that phrase now, it's nonsensical (no offence TDH).

"On a completely unrelated note: saw 2012 today and did a double take on a throwaway shot of a pan to a supermarket aisle shelf with rows of plastic soda pop bottles all labeled VALIS! What a strange reference to PKD, in this of all films. Anybody else catch that?"

Wow really? Classic! Looks like someone in charge finds the Savonarola politic as rich and endlessly baffling as Phil, talk about a bottomless well. Was just looking at VALIS again the other day, man the honesty in those first few pages is achingly beautiful.

For mine...ASD was done respectfully and with genuine heart...can't ask for much more.

"A Scanner Darkly is the only movie that comes close to what PKD wrote."

Actually, the French film Barjo, an adaptation of Confessions of a Crap Artist, is, its setting in France aside, a very faithful adaptation of the novel, although it certainly does not include everything in the book.

One might say that a warm day in January in Minnesota is the exception that proves the rule that January days in Minnesota are cold.

During changes of season, during a month in Minnesota where warmer days are as much to be expected as colder days, the warm days are no longer exceptional as the rule no longer holds.

I agree that A Scanner Darkly is a great adaptation and stays true to the book -- I would have preferred it done as live action (or what it's called) instead of the rotoscope, especially with such great actors as Robert Downey, Jr., and Woody Harrelson involved.
Concerning your article from 2007: Three Stigmata by Cronenberg ... wow! great idea. I second that motion. May I add, Ubik by David Lynch. (The Penultimate Truth by Jena-Pierre Jeunet, anyone?)
I liked Total Recall and Blade Runner in their ways, but not really as PKD adaptations, but Minority Report was rubbish.
There are, of course, also adaptations which far surpass the originals: Kubrick's The Shining and A Clockwork Orange come to mind ... but then I am a fan of Kubrick's works and neither of King's or Burgess's ...

Oh, no...Kubrick's A CLOCKWORK ORANGE, fine as it is, in no way surpasses Burgess' novel, wonderfully told in his invented slang, "Nadsat."

Kubrick's film lives up (or down) to Burgess' own dismissive description of his novel as a "nastly little shocker," offering a dazzling film with little real depth. Burgess' novel really is driven by the idea that we have choice, moral choice, and in this lies our humanity. Remove that, even to "better" us, and we are no longer--can be no longer--moral creatures, capable of redemption, as animals are not.

Robert, I have to admit you are right. What I meant was simply that I can watch the film version again and again, while I feel no impulse to reread the novel -- it just didn't impress me as much as the film (and, especially Kubrick's imagery).
By the way, which version did you read? The one omitting the final chapter or the one including it?
Doug Spaulding

I've definitely read A CLOCKWORK ORANGE three times, and I think even a fourth time, although I'm foggy on that. I think, for its language alone, it is endlessly entrancing.

Robert--apologies for the late reply. Don't get me wrong, I have a lot of respect for ASD, and it's been great to see the effect it has on my friends who aren't OG-PKD. It's a wonderful film and a valid interpretation, doing justice to the novel PKD sometimes considered his greatest, there's just some things about the interpretation I don't resonate with. I think the most important spiritual theme in the book is that of redemption, which PKD interrogates with masterful mindfuck skepticism. But I think ultimately this must be understood in terms of PKD's christian outlook, which Linklater doesn't have much interest in or affinity for. Which means some of the more Kierkegaardian aspects of the humor is lost in favor of druggie comic relief (which is also there in the book so it's hard to call foul and say RL is getting it wrong). I'm reminded of a student Macbeth I recently saw which wasted the banquet/Banquo's ghost scene by making it too funny. Redemption apparently fails in the narrative, but it's the compassionate look that PKD as narrator takes in ASD the book that makes redemption remain an issue. Linklater's cinematic eye is not so compassionate. There are also some aspects of the depictions of altered states of consciousness that are lost on RL. PKD really takes us inside the head of the drug-induced psychosis, whereas RL often misses the chance to get inside in favor of doing satire on it from the outside. It's an emic vs. etic thing--you have to have taken Substance-D in order to empathize...

these are very rough thoughts, and I'm still not sure what to make of my own interpretation so I hesitate to say even this.