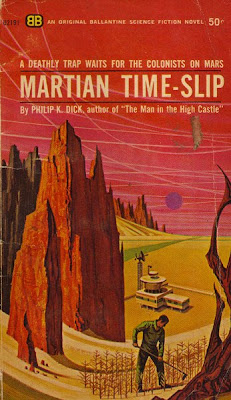 Apologies for the paucity of posts recently. The grading flurry has begun as I try to return essays before the end of the semester, but I'll bet you're sick of my excuses. I have been sneaking some time to reread Martian Time-Slip and am enjoying it immensely. Don't know if I'll have time to delve into the novel as deeply as Maze of Death, but I will be blogging about it in the coming days.

I've been meaning to post a bit about Ludwig Binswanger, as my research has made it increasingly clear to me that his writings on existential psychology are essential if you ever want to get your head around the recurring notion of the 'Tomb World' in Dick's books. Here's an article on Binswanger that should help get the ball rolling. The problem with the essay of course is that it doesn't make it clear where Binswanger lays out these theories, and provides very little in the way of quotes from him.

I'll let Dick himself preface your reading with this snippet of conversation from Martian Time-Slip:

Wearily, Steiner said, "Fascinating. There's always something new, isn't there, in psychotherapy?"
"Yes," Dr. Glaub said, nodding. "Especially from the Swiss; they're ingenious in comprehending the world-views of disturbed persons, of encapsulated individuals cut off from ordinary means of communication, isolated--you know?"
"I know," Steiner said. (41).

I hope we can discuss the importance of the tomb world and Dick's use of the concept in the comments section.
Posted by Ragle Gumm at 9:43 PM

thanks for this. I've got the paperback of MTS with that cover! although it's misplaced right now. I've been meaning to get further than 3 chapters into that book so I'll definitely try to finish it soon and follow the blogs...

The Binswanger paper that seems to have been most important to PKD is "The Case of Ellen West" and can be found in a book called "Existence: a New Dimension in Psychiatry and Psychology" edited by Rollo May.

It's a pity you chose MTS. The voting thing for Maze of Death was really good.
Off topic though, i've just got We can build you and it seems to be written in the first person. I wonder how many PKD books are written first person - first one i've come across.