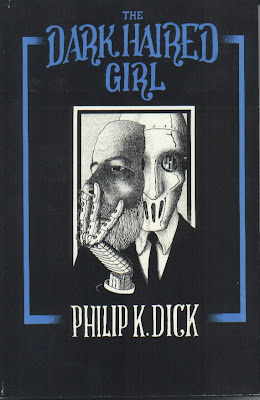 Gentle readers, these past few weeks have been especially trying. In addition to the regular end-of-the-semester grading , there was a whole students-will-be-forced-to-live-underground ala-Flow-My-Tears vibe happening where I work. Don't believe me, check out the video. Your patience is greatly appreciated and will now be richly rewarded. I was contacted recently by Bev Davies, a woman Phil courted in Vancouver in 1972. Her name may sound familiar to those of you who have read The Dark Haired Girl which contains a long letter from Phil to Bev (you can read it on her website here). Anyway, what follows is an email interview, about PKD and his time in Vancouver.

Q: How did you meet Phil?

I heard him on the radio being interviewed, the interview was very interesting, he said "If you took the book Stranger in a Strange Land and rolled it up and smoked you still couldn't get off." I had, I felt, wasted many days reading that book. It was an open line show, so I called in and asked a question or something, and Phil asked the DJ to get my number. I knew the DJ so a few minutes after the show he called me.

Q: What kinds of things was Phil talking about?

When he sat around my house and talked he would just be part of the conversation, but then sometimes he would restate the conversation and bend it into an amazing story from the basic conversation. I need to add it was not like talking to a mentally ill person who also does this but bends it into the rant they do. I have heard others thought that of him but at the time I met him they were just interesting stories, yes the cops were bad and the hippies were good, but that was my world going out of the Vancouver Yippies as I had.

Q: Do you remember any funny stories, good lines, or interesting anecdotes about your friendship?

Sadly no, I do remember him in my bathroom reading the soup ad poster on my wall; I still have that poster. He was howling with laughter, saying "what is cream of yerlec?" The ad had cans of soup with the names mixed up. He also took me out to dinner one night into the west end; I think we took the bus and he knew the owner, and it seemed a strange thing to me, to be taken to a nice place to sit and eat. It was nice, but after reading his letter I understood that was what he was used to. Me, I just sat around the living with my friend Bob, and my son and ate kraft dinner, well I could cook in those days also. Out to dinner was something that was done when Mom and Dad came but it was nice.

Phil showed me a cover of one of his books and said how dreadful they were (the covers) and he was sure the artist had not even read the book. I was at art school at the time. I asked him how I could get to do covers for his books. He said move to New York City. He said the publisher would not deal with anyone who could not walk into the publishing house for corrections etc.
Q: Based on my research, this was a dark time in Dick's life. Did you see any evidence of this?

There was a mystery to where he was staying (though I understood it was west of where I lived) and why he had stayed past the Science Fiction Convention; he said he had a curfew.
I never found him depressing, wishing to share his moods in a negative, or needy way. Yet when you read his letter you hear a man that just wants one word to return to Vancouver, to a possible friendship/relationship and I never opened that door, I do not really know why.

Q: Did Phil talk about his future plans, or past events?

No, he told me about relationships and past wive(s) and a child I think. We talked about his returning to LA. I told him of my ongoing fear that I had machines inside of myself, that vision was from my NYC acid days. We talked about the revolution and the USA.

Q: Did you tell you about the break in at his last house in San Raphael that happened right before he came to Vancouver?

I do not think so, what I seem to remember, we tried to make each other laugh, today it feels as if we were in the air rather than on the ground, a story like that would have brought us down.


Thanks Bev for your time!! This is exciting!
Posted by Ragle Gumm at 11:22 PM

thank you for posting this wonderful interview!
~~ Tessa
~~~

wow, what a great interview. I especially appreciated her emphasis on Dick's sanity--or the difference between what he was doing with his "Crazy conversations" and what mentally ill people do with theirs.

Dirty students. I hear you can get five years in a forced labor camp just for feeding one.

A fantastic interview, and thanks for sharing that very revealing 1972 PKD letter, Bev.

I love his description of Fullerton, as a new resident :

"The buildings consist mainly of Spanish-style apartment complexes, some extremely large, like 300 units. Not too expensive, though.

"The streets are clean. Cops are
everywhere. Little crime, no dope. Some good left-wing political activity
around the campus, and many bright, super nice students.

"Excellent restaurants. Except, of course, for the 25 million McDonald Hamburger stands, which are also modern and nice-looking."