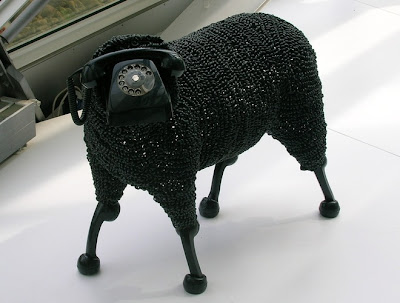 For his 81st birthday, Google apparently named their new iPhone competitor after some of Dick's most memorable androids - and his kids aren't happy....

Update: I've been thinking about this. The article I've linked above is overly snarky (the article's comments are beyond the pale and suggest nothing less than the death of civility, if not civilization itself), and I certainly don't want this blog to become that kind of cesspool. There's a few ways of looking at this: first, it's weird that Google licensed the name 'Droid' from Lucas' Porkduction Company. Why on earth do you have to license a name? I can understand if they wanted to call it the Google Pepsi Phone, but if you're going to 'license' some variation on the word 'android,' shouldn't some very old Greek guy get the money? Additionally, I would agree with Isa that there is a significant reference to Do Androids Dream of Electric Sheep? with the name Nexus-One. It's kind of a clever gimmick: we know a Nexus-6 is indistinguishable from a human being and in many ways may surpass us. By using the title Nexus-One, Google is suggesting they are on track to make a piece of technology with capabilities superior to us in only five models! But references like this (and this) weave an author into the fabric of a society, not that Philip K Dick's work needs any help being relevant to our times. In my opinion, these references are compliments not commodities, but I'm a idealist, an impoverished one with no words to license at all.

At the end of the Wired article their charticle bot writes:

"For those seeking some Dickian fun, go back to our original post about the Google Nexus and spot the PKD reference we dropped in."

Which, I guess, refers to this line which isn't exactly PKD's line:

"Or the Nexus could be a light that burns twice as bright as all the existing confusion of Android handsets combined..."
Posted by Ragle Gumm at 9:10 AM

I'll have to check my PKDictionary, but wasn't it Nexus Six and not Nexus One in DADOES. I'm kind of scared to use any of Phil's millions of words right now... will I be sued? What about WarCraft with its Nexus dungeons . I don't think Phil was so litigious and as I recall he liked to cite references from many other authors. What if they had all sued him?? I think the "fam" should realize anything that makes people remember PKD is likely to result it more books sales. It can only help, not harm, the PKD brand.
and, yes, Happy Birthday Phil!!!

I agree with anonymous...increased references could only spark increased interest.

This is really the product of a much larger problem with our legal system and society in general. We [in general] have become very litigious over a sense of entitlement. And in the corporate world, patents for routine tasks are being handed out, for things the patent owners did not invent. Sorry to rant...

"Isa Dick Hackett, daughter of the paranoid science fiction genius Philip K Dick"... I wonder if the word paranoid was inappropriate or misplaced in this sentence of the article.

Aside from the possibly baseless comments by Isa Hackett is there any reason to think Google named the phone with any intended allusion to the androids of DADOES? If someone claimed Electric Shepherd Productions is an allusion to Bruce Gillespie's thesis I'd see that as a reasonable assumption because there seems such an obvious connction. OTOH, by definition nexus seems a likely name to choose for a cell phone to suggest how connected to other people and things it will make you while an extremely vague allusion to a fictional android with built-in obsolesence doesn't seem a great marketing choice.

In fairness to the "kids", I've not yet read any comments on this by the other two. And as a general statement, I don't recall ever hearing anything from Christopher Dick that's has brought certain words to mind which I think I'll refrain from stating here.

Brilliant response to the snark Dave. Bravo. It's always a relief to read such a nicely written corrective to such a badly adjuster writer on the ad hominem attack.

I've noticed that in both articles I read the comments pro Isa Dick were much more insightful than the bile sprewed against her. And furthermore it strikes me as kind of grave-pissing vs. old Phil when they say his kids don't have a right to the money. Aren't they his living legacy, and more important than the literary one? At least according to Phil's own human-centered approach they are more important, I'd say.

I don't understand intellectual property rights law, and probably wouldn't agree with it if I did, but there's no reason to be nasty and act as though Isa is being irrational or ridiculous.

I searched the United States Patent and Trademark Office for the use of Nexus. There are about 50 registered trademarks that use the word Nexus, none has been filed by Philip K. Dick or his estate. There is no registered trademark for Nexus One or Nexus 6. It seems to me that it is perfectly legal for Google to use it.

What the hell are these people thinking?

Hi there!
Ha, you know I have that phone (the Google G1 also known as the HTC Dream) and never thought about the name of its OS,Android!
Its funny but its not like Dick has the monopoly on the name android, which is short for Anthropomorphic Droid-that term goes back a long way.