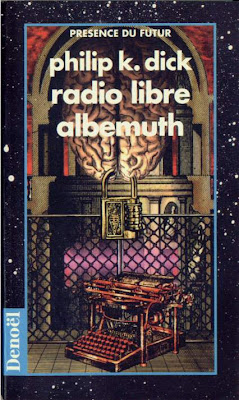 Here's an interview with Director John Alan Simon about his progress on his cinematic adaptation of Radio Free Albemuth:

Q: When will the general public get to see this movie?

That's hard to forecast. Needless to say, we have to finish the film first. Then we need to find a distribution deal - or most likely two primary deals -one distribution deal for international and another for North America. Chances are, the film will be sold territory by territory by an international distributor, which really means an international sales agent. Then outside the U.S., the French distributor, the British distributor, etc. will each make an individual decision as to how best distribute the film in their individual territory. Theatrical, TV, DVD, any or all of the above. Prior to those oversea country releases - or basically simultaneously, we hope the film will get exposure at various international film festivals. Just prior to the American Film Market in Los Angeles in November, we screened the movie as a work-in-progress for several distributors, all of whom expressed interest. I would say it's pretty definitive that the movie will be offered on a territory-by-territory basis at the Cannes Festival market in May. Or possibly, if we're able to organize it in time at the Berlin Festival market in February.

In the U.S. the distribution forecast is a great deal more murky. The climate for indie movies has badly deteriorated. Many of the companies that would have been logical candidates for RFA have either gone out of business, or greatly scaled back within the last 18 months - companies like Warner Independent, Paramount Vantage, the Weinstein Company, Netflix's theatrical distribution company, Fine Line. There aren't many companies left that are still in the business of distributing and marketing indie movies. Lionsgate for example, has for some time now had a business model now that only strives to acquire films that can gross $20 million and upwards theatrically. Much as we love RFA, that's not its business model!

So we'll have to see what the best way is to get this movie out in the U.S. will be. I'm certain there will be some theatrical release but it may be limited to the top major markets and in what used to be considered "art house" or "calendar" theatres. Unlike most filmmakers, I have an extensive background in distribution and film sales, so I don't look at the prospects for our movie in the current climate with rose-colored glasses. But it goes without saying that we will undertake the distribution struggle with the same tenacity and determination that's been the driving force of the movie's production. It's a very tough time out there at the moment for indie films, that are basically "review" rather than "marketing" driven. It's something of a marketing/distribution challenge that this PKD movie is probably more in keeping with the outsider/indie spirit of PKD's work. That's the movie we wanted to make, but the downside is that we don't have a big studio to get behind us and get the movie out there. We're doing it all on our own.

I may be asking for volunteer "helpers" among the PKD fan base very soon. And devising some interesting incentives. Not of hard currency type, I should hasten to add. But we will definitely figure out a way to make it all both entertaining and educational. More on that later.

Q: What's left to do in order to complete the film?

This might be more detailed info than you wanted, but here goes:

Since October we've been engaged in all the sound work that had to wait until we "locked" picture. It's amazing how much difference sound makes to the viewer's movie experience. David, you watched RFA with "unbalanced" dialogue and with all the distracting, unplanned background noise still in the movie. Our sound designer, Evan Frankfort, has for about the last eight weeks been putting together all the various tracks - cleaned-up dialogue, foley, sound effects, music. Next, he and I will make the decisions on a scene by scene basis how to "balance" and "mix" these elements. However we've already done the ADR, which is re-recording of dialogue for scenes where location or other problems made good sound difficult to capture during producing. It's amazing how far the art of ADR has come in recent years. Directors like Spielberg and Fincher virtually ADR their entire films now - or close to 80%. It's a far cry from the days of the Spaghetti Westerns of Leone or the early horror films of Dario Argento where "lip-lock" synch was so obviously off even when the original actors "dubbed" their parts. I've gotten to hear both David Fincher and James Gray talk extensively about sound and then speak to them a little about these issues. Try listening to a film like Zodiac with good headphones and without watching the picture itself, and you'll get some notion of how vast the palette of sound can be to enhance a movie and help tell the story.

Q: Was this a difficult or easy film to make? Why?

Nothing about making movies is ever easy. It's not for the faint of heart. Just negotiating the PKD book rights took well over a year. Writing a script, finding financing - these are actually the hardest parts of the process. I turned down the opportunity to make this movie for two or three times the budget we ended up with, because I didn't want to compromise the story with action sequences, fights, explosions unnecessary violence, actors with "name value" who were wrong for the roles, and other elements that would have made the movie more "appealing" for the foreign sales companies that typically step up to finance indie-budget level science fiction films.

I wanted a high degree of artistic/creative control and the trade-off was working on a very limited budget for the scope of the picture I envisioned. But because it was Philip K. Dick and because the script was faithful in spirit to the book, we attracted people at every level of the film that were willing to work for less than their "quotes." Of course, that spirit has to start at the top. My producing partners, Dale Rosenbloom, Stephen Nemeth, Philip Kim, Elizabeth Karr and myself all deferred our entire salaries, so that the limited financial resources could go fully to what you're going to see on screen.

Production itself is a pleasure because now finally you're getting to actually make your film. But some films are easier than others. The perfect indie movie is something like the Jennifer Jason Leigh movie "Anniversary Party" - one location. Or the Danish film, "Celebration." By contrast, RFA had close to 40 locations on a 24 day shooting schedule. The "perfect" indie movie also has very few speaking parts, for example, Darren Aronofsky's PI, which I greatly admire. RFA has something over 35 speaking parts. So just from a logistical point of view it was an arduous production schedule for 24 days of shooting. We never worked less than 14 hours on a six day week schedule. Some days more.

At the beginning of the film, the impending Writer's Guild Strike made the movie extremely difficult to cast. Hollywood was "rushing" movies into production to stockpile in advance of the strike and almost every actor in town was "working" on bigger budget projects. Usually with indie films, if you've got an interesting script, you're able to get well-known actors onboard once they know they're not doing a big studio film in that same time frame.

In our case, we ended up with a relatively unknown cast - but in many ways I think that serves the material. I think that for a very offbeat story like RFA, it would be undermined by "stars." Of course, unknown doesn't mean inexperienced or untalented. There were many well-known actors who wanted to play the leads, but weren't quite right in my view. We ended up with actors who really loved and understood the script and appreciated the opportunity to move beyond usually supporting parts in studio films. I'm really pleased with the performances of the lead cast and also proud of the caliber of actors who came onboard to play supporting roles. Every actor on the movie worked for SAG minimum. As I mentioned, the producers all deferred their salaries. I also deferred my directing fee. So in a true sense, it's been a labor of love for everyone involved. For me, it's been two years of unpaid work.but it's also been two years of artistic freedom with the only constraint being insufficient funds to finish the film any faster.

Towards the end of the production, the worst fires in recent LA history made several locations unavailable at literally the last minute. We were scrambling all the time to find and replace locations. So even on my "day-off" Sunday, I was working just as hard as during the regular production week. What I lost in sleep, I made up for in weight by eating too much to keep my energy up. I'm looking forward to shedding some of the excess when the movie's completed.

Post production has its own stresses. Trying to do extensive special effects (nearly 150 CGI shots) on an indie budget is very challenging and more problematic than I anticipated at the outset. But editing has been a wonderful experience working with Phil Norden, who was recommended to the project by director Walter Hill. Phil has been a real collaborator, working for over a year now without any pay, and helping me with many of the post-production supervising duties. It's also been great working with the composers involved in the project. I'm a former music critic and contributing editor to Downbeat magazine, so music is incredibly important to me. I've been very pleased with the contributions of both Robyn Hitchcock for both songs and score and the other primary musical contributor, Ralph Grierson, who I've worked with very closely in his studio. Our sound designer, Evan Frankfort of Wouldwork Sound, has also been amazing in his work ethic and creativity.

Thanks John, and keep up the good work!
Don't miss part two of the interview - coming soon!
Posted by Ragle Gumm at 9:53 AM

Great interview. Thanks David!
I'm really looking forward to this film, but it's looking like I'll have time to re-read RFA a few times before I get a chance to see it.

Radio Free Albemuth is one of my favorite PKD books. And while I'm pretty wary of film adaptions, this guy actually seemed pretty cool. I'll be looking forward to it.