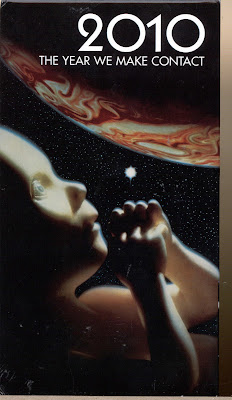 I wish I could find this scene from the blooper reel to the movie 2010: The Year We Make Contact, during which Roy Scheider tries over and over again to get a ball-point pen to sit suspended in the air in a harness made of fishing line to try to depict the zero-g environment of space travel. Try as he might, the stupid thing will not stay. It's a nice metaphor for 2010, which felt at times like an endless blooper reel.

I thought we'd have seen both the Adjustment Bureau and Radio Free Albemuth adaptations in 2010, but neither materialized - though RFA made a strong showing at NYC's Gotham Screen Film Fest. Adjustment Bureau is now due out in Spring of 2011. So Inception was the closest we got to a PKD adaptation in 2010 - and it apparently was inspired by Scrooge McDuck. I actually plan on seeing the film this week and hope I can write something up about it.

The Philip K Dick festival was held in August 2010 in Colorado. Definitely my funnest vacation of the year. A great time was had by all of the dozen or so who showed up. (Does this mean we're only a year and a half away from the next PKD Fest scheduled for the Bay Area 2012?! Yikes!)

The arrival Laurence Rickels's nearly-indecipherable book I Think I Am: Philip K Dick - a long-awaited examination of Dick's irv made by a shining star in the academic community which, like many things in life, straddles the line between clever literary analysis and opaque, post-Freudian academic wankery.

A new edition of Anne Dick's memoir Search for Philip K Dick, was released by Tachyon publications (with a new Introduction written by yours truly). A fun read, an important resource, and now... even easier to get...

Scott Timberg's pair of great articles about PKD: one about his time in Southern California and one about Anne and her memoir. The ratio between good, insightful articles about PKD and the glorified press releases we've read about PKD in the past is headed in the right direction.

Cornell University selected Dick's Do Androids Dream of Electric Sheep? as their incoming freshmen read for 2010 and I made a fun trip to Ithaca to talk about the book at the local public library.

It was a great year for me personally. The New York Times article and my Introduction of Anne Dick's memoir are accomplishments I'm quite proud of, and I hope to be able to build on these in 2011.

What else is there to look forward to?

Another academic book about PKD! This one by Italian Dick-head Umberto Rossi who has been kind enough to share some of his work right here on this blog. I have high hopes for Rossi's book.

I can't think of anything else to look forward to... besides burritos and stuff. Oh and maybe this year we'll see Radio Free Albemuth in theaters in addition to Adjustment Bureau. That would be cool. If two PKD movies hit theaters this year, well, you know what that means: prepare yourself for the onslaught articles examining 'Hollywood's Fascination with the Unlikely King of Sci-Fiʼ...

This may sound insincere coming from a Total Dick-Head, but I couldn't do this without you, gentle readers, so keep those insightful comments and gossipy emails coming this year. In fact there's gonna be some really cool never-before-seen stuff.... in the very next post!

I almost forgot to mention that this blog has received the coveted Top Kidney Disease Blog award of 2010 from the prestigious Certified Nursing Assistant website, based (I'm guessing here) upon the number of times the word PKD appears (which for many, sadly, does not stand for Philip K Dick but Poly-cystic Kidney Disease). And this is like the most Dickian thing ever, right?! I mean this weird, grammatically-awkward operation, Certified Nursing Assistant is giving away awards based on a computer's misreading of subtle linguistic quirks! Oooh, and a banner!

(note this content was removed in 2013 when the nurses contacted me repeatedly and asked to have it removed. Why did you send it to me in the first place, I was tempted to ask).

I heard a numerologist on right-wing radio (WTF?! Right?!) and she was saying that the eleven in 2011 is a door, and we can be whoever we want to be when we go through that door - and this is our year to do that. Phil Dick reminded us in his novels that time is door we can pass through in only one direction, no matter how hard we may try to do otherwise. So choose your two-thousand-and-eleven-door wisely dear readers.
Posted by Ragle Gumm at 12:24 PM

great recap thanks. nice to have all the links in one place for rereading and finally getting around to. 2011 we can look forward to my PKD+Religion blog, which is coming very soon... honest!

I just read In search of PKD. Great intro, great book. I've read Divine Invasions and I am alive and you are dead as well so there was some overlap, but I feel like it gave a better feel for his personality than the other two books. Has anyone read the out of print one? (I think it's called "to the high castle")

I've lost all hope in the adjustment team. Major delays, reshoots...I doubt they would bother with all that unless it was crap.


Also, congrats on your award. Couldn't stop laughing at that bit. ;)

Look for Radio Free Albemuth in theatres in 2011. Long hard road for indy distribution, but we're on the case. RFA had its international premiere at Sydney Fantastic Planet Film Festival in November 2010. Picked up 2 awards. Directors Choice Best Feature, and Best Actor for Shea Whigham, who plays PKD in Radio Free Albemuth. radiofreealbemuth.com for more information. @RFAmovie on Twitter

Well, for me, one of the highlights (of 2010) was the release of my PKD-inspired novel, A Kindred Spirit. 'course that's just me -- I'm the author. Nice review of it in Otaku #21, also on the revised fan site, PhilipKDickfans.com (Dave Hyde's review) and Tessa has posted a few good reviews, including one on Amazon. I just know the Total Dickhead will post something... in conjunction with Adjustment Bureau debut, or PKD Resurrection Day, right?