Things and Stuff About Amazon and an Article About PKD's Writing

Gentle readers, as you no doubt have already heard, amazon canceled all of their associate accounts in California last night. So, I am switching over to Powell books, where I should have been in the first place. My feelings on the subject are well voiced by this dood.

So, let's do this. Go buy Umberto's book over there:

Pre-order your copy of The Exegesis over there:

The Exegesis of Philip K Dick

I just noticed there's a video for the book!

In case none of this interests you, check out this article examining PKD's prose style.

A long silence, then. Then, “Oof.” She leaped, galvanized as if lost to the shock of a formal experiment. His pale, dignified, unclothed possession: become a tall and very thin greenless nervous system of a frog; probed to life by outside means. Victim of a current not her own but not protested, in any way. Lucid and real, accepting. Ready this long time.

"Take a minute to read this passage closely. You may not have noticed, but Dick has just compared a naked woman in the throes of orgasm to an electrified frog. Yet the description is so out-of-nowhere unexpected and ambiguously communicated that the first time I read it I thought Dick was comparing a penis to a jolted frog leg (“become tall and thin…”). There’s also the weird, dehumanizing way that the woman here is labeled a “possession,” a description given some obvious counterweight—one can sense Dick hoping—by the word “dignified.” And the adjective “greenless” is stupefyingly strange in this instance (and would be in a lot of other instances)."

Did that guy just completely misread the excerpt he's analyzing? The woman is galvanized; the penis is like the frog of a nervous system. I'm not defending it, I'm just looking at the syntax! But I think I like point the guy's making, if I understand it correctly. The other cool thing, the guy quotes Lethem:

"What does it mean when a great writer like Philip K. Dick is considered to have an occasionally terrible prose style? Even so brilliant and well-regarded a defender of Dick’s novels as author Jonathan Lethem has referred, in a 2007 interview with the online journal Article for example, to Dick’s “howlingly bad” patches of prose."

That's my interview! Nice thing about the internet is sometimes you send something out through a tube, it comes back to you through another!

Up top that's a picture of the new Mariner Books editions of PKD's VALIS. Here's a forum where you can look at some of the others... I kinda like this one... 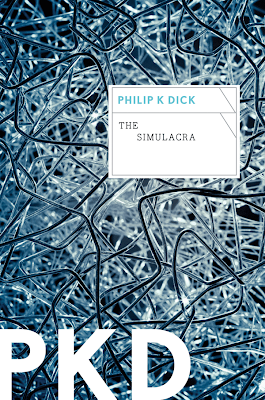 These Mariner books look fantastic! They're definitely a step-up from the Vintage covers... I hope they print more though. I've only read about four PKD novels so far, and I'd love to get the rest through this publisher.

The Mariner covers--based on these two--are bad. Someone with Photoshop slapping together dull typography with hacked out computer graphics. They look like what one would see on a budget line of books.

As for the Exegesis....hmmm. I might--might--buy it...just to have it on my bookshelf as part of my PKD library, as I did with Lawrence Sutin's previous EXCERPTS FROM THE EXEGESIS, but...is anyone actually interested in slogging through it?

@Robert Cook: I have read and re-read the selections, and will undoubtedly do the same with this new publication (though it will certainly take longer). It is tedious at times, and again, this one I'm sure will be more-so, but the "meat" of PKD's philosophical journey is a very real and important thing to me. So yes, someone is interested!

I noticed there are little variations in the title card areas of most, but not all, of the covers. Nice little touch.