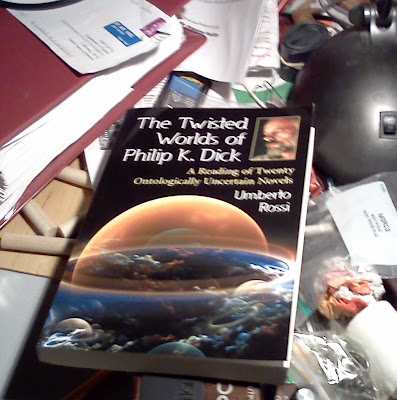 Once again, I'm left with insufficient time to do more than blast you with some links and quick thoughts, as I finish up summer school. Luckily you can enjoy reading through the latest issue of PKD Otaku #22 out this week which includes much to be savored (download .pdf file here). I've only skimmed it a bit but was impressed by Frank C Bertrand's column on "The Magic Flute" allusion in Do Androids Dream of Electric Sheep? which I found quite interesting as I've thought about the relevance, but don't really know enough about the opera to make any connections. Frank does some heavy lifting for us yet again.

There's also a great interview with Tessa Dick, and others with Scott Apel and Jami Morgan (whose book I very much hope to have time to read someday)... Near the end John Fairchild says this of Christopher Palmer's "Philip K. Dick: Exhilaration and Terror of the Postmodern":

"I started to read Chapter 1, “Philip K. Dick and the Postmodern” and just couldn’t finish it. He makes statements like “Today we live in the epoch of the postmodern, and are subject to the condition of postmodernity.” Really? I don’t think we’d get much agreement on that one. At least in the circles in which I travel."

I know and like John very much. I also think we are living in the 'epoch of the postmodern.' Postmodernism is to blame for this communication breakdown insofar as it has never really developed an efficient way to define itself. Let's use, as a starting point, a sentence provided by the Keeblers over at wikipedia:

"Postmodern philosophy is a philosophical direction which is critical of the foundational assumptions and structures of philosophy."

Much of Dick's work is a critique of rationalist philosophy grounded in the trite neatness of Descarte's Cogito Ergo Sum. For Dick, Descartes is like Deckard, futilely searching out differences without distinction, an operation that, because of the complexity of the problem and the subjective bias of the observer, is irresolvable. We are at the epoch of postmodernism because much of our reality has become a subjective bubble - that is to say a Fox News viewer is, to some extent, existing in another parallel reality to a listener of NPR. Advertisers warp reality to try to get you to buy stuff, and now they want to do it without you noticing. Because of this we can't really know if they've already gotten to us, so we are at the epoch of postmodernism, it's just up to us postmodernists to explain why better.

Which brings us to this pretty good read on Dick's Posthumanism (but, I hope the author, Alex Lyras, knows that had he called Dick a posthumanist to his face, PKD would have given him a fat lip). I actually think Dick's focus was on the importance of retaining our human-ness in a world of artificiality. Regardless, it's a good read. Lyras writes:

"In the world of Blade Runner, replicants and humans suffer from the same existential crisis. Both seek answers to same elemental questions. Where do I come from? Where am I going? How much time do I have left? Mid-century language philosopher Ludwig Wittgenstein would answer that our ability to formulate questions like these doesn't necessarily mean intelligible answers exist. Language isn't a tool for unearthing deeper meaning. It's a tool for connecting on the surface. That we endeavor to ask the big questions is far more useful than endlessly confabulating over some metaphysical conundrum. If we're able to find meaning or get relief from an insightful exchange with another being, does it matter if their insides are circuitry?"

Which reminds me, I heard this radio show on NPR which analyzed classical music in great detail. I think it was hosted by Susanne Vega. Now I can't find anything about it. I hope readers can help me identify this show, because there was a half hour on a piece by Beethoven that made it sound like Ludwig was innovating in much the same way as Dick: using unexpected dynamic and key changes, playing in odd registers. So this may be an additional foothold to be further explored, if we can figure out what the show is called and where it's archived on the net.

I got Umberto's book. 10 pages in I can say it's both insightful and readable - two circles who have yet to touch on the "Academic Books About PKD" Venn diagram. I look forward to reading more and reporting back to you, but I can already tell you that the book's premise seems to center on the ontological uncertainty in Dick's work which is a product of Dick's slipping back and forth between subjective and objective value systems. In fact, Umberto, in his intro, quotes this, our recent quote of the day. Citing this key interplay between empirical systems and individual experience as the basis for the ontological instability in Dick's fiction (I'm sure Umberto will correct me if I'm reading it wrong).

The book is a bit pricey. You may want to urge your local library to get it, or you can get a kindle version, but I think you're gonna wanna read it.

David, I just wanted to take a moment to thank you for your hard work on this blog. It is a highlight of my week to check in and stoke the flames!

Are you referring to WFMT's 13 Days that Changed Music Forever Series narrated by Suzanne Vega?

Thanks for the comment, David, as I rarely get any kind of feedback on what I write about Philip K. Dick. Most of it seems to go through one synapse and out the other. I do think it's very important to pay close critical attention to what PKD actually wrote, not what we wish he had written, or what some "ism" tells us he actually meant to write. The allusions sprinkled throughout his stories and novels are there for a reason, and do help to give us a multi-layered understanding of what it's about.

@FCBertrand:
I just cracked open the latest Otaku yesterday and will be reading the column on "Do Androids" and "The Magic Flute". I look forward to it. I can only imagine what an experience it must have been to interview Phil.

From "What If Our World Is Their Heaven?", Dick describes one of many outlines for 'The Owl In Daylight':

"So what I'll do is I'll create a character based on Beethoven and Faust together. 'Cause Beethoven, I was looking at my Britannica one time and it said Beethoven is the greatest genius the world has ever seen."

He goes on to talk about wanting to write about the greatest challenge this genius could face, and overreaching himself in the process, writing notes he couldn't keep up with. I really love his voice in these interviews, it's so trusting of certain truths, which is sweet for someone who poked holes in everything that came his way.

Hey, I'm only SIX WEEKS late in thanking you for the link and mention of my novel. THANKS, Gill! I am going to promote it (yet again) mid August, because it's a Finalist in the Global eBook Awards and the FINAL Revised edition will be ready for buying on Amazon by 8.20.2011 So, best you waited to read a 99% error free version ;) AND, here I would like to give a SHOUT OUT to Frank Bertrand who did the copy editing for the revised edition. He did a great job. I encourage all you authors and authors-to-be to support a Dickhead and use his new editing service. *** jami

aka ej Morgan, A Kindred Spirit