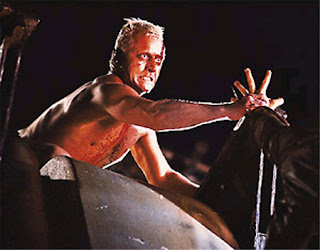 A short article in The LA Times advises readers on how to tackle Dick's prolific output. They share two suggestions, the first, not terminally stupid:

Where to start: "The Man in the High Castle" (1962) is an alternative history in which the Axis powers have won World War II and includes a book, banned in America, that posits an alternative history in which Hitler lost. The novel won a Hugo Award and, like much of Dick's work, plays with perception and competing realities.
Where to start, alternative version: "Ubik" (1969) is a mystery wrapped in a horror story told by a (probably) dead man. It has psychic intrigue, government interference, half-alive cryonically frozen characters and a crumbling reality. See also: competing realities, untrustworthy perception.


But then quickly move deep into the stupid with this recommendation:

What to skip: "Do Androids Dream of Electric Sheep?" (1968). Although it served as the inspiration for the film "Blade Runner," the novel is not the same, nor nearly as good.

Dear gods... I read the first recommendation and I thought, hm, not bad! Then the second, "wow, someone has actually read some before putting pen to paper!". I didn't realise there was a third (non-)recommendation coming up so I was caught anawares.

Maybe it was written by a different person?

If you're looking for guidance on what to read from a newspaper, then you're already a hopeless case.

Even in their recommendation of UBIK they were stupid, in that they reveal one of the late story revelations, (that the narrator is not necessarily alive, at least, not as we know it or as he perceived it).

I'm just glad they are recommending Philip K. Dick at all. But yeah, pretty dumb and annoying!

people tend to disclose way too, too fast about ubik, doesnt take many words to spoil the elegant twists of that story. As for the last comment, poor bastard, im sorry they feel that way

Its heresy, that's what that is.

Down with this sort of thing!

Do Androids Dream of Electric Sheep is one of my favorite books. It is better than Blade Runner which missed the whole point of the story.

tried twice to get through High Castle...just not resonating with me at all. much prefer the later PKD output.

I'm glad I wasn't eating or drinking something when I read that or I might have choke to death alone in my study. I discovered Dick when I was reading my way through the sci-fi movies; Alien, The Black Hole, Mad Max Beyond Thunderdome (which is a surprisingly good book). In addition to bringing my movie book crusade to end, Do Androids Dream of Electric Sheep began about a two year period where the only book I read that wasn't penned by Dick was Divine Invasions: A Life of Philip K. Dick. I was writing a term paper about my favorite author for English 1101. That book is the empathy box. It's covers are the handles that allow us to fuse with Deckard and to suggest that any Dick book should be skipped makes me feel worse than I did when she killed my sheep. Even more so that it was suggested Do Androids Dream of Electric Sheep was the one suggested as skippable. Blade Runner (of course this is all my opinion) was a horrible adaptation of the book and to suggest skipping the book because it isn't "the same, nor nearly as good" just shows that the author of the article is devoid of the capacity for empathy. I didn't much care for High Castle and Ubik, even though I loved the commercials and taking the trip back in time, was the only Dick book I figured out before the end. I wouldn't suggest those as a first Dick read. I wouldn't suggest A Scanner Darkly either because that book almost ruins every other book in existence. The two books I would suggest for a Philip Dick virgin would be Robots, Androids, and Mechanical Oddities (a complete and in depth explanation of what is meant by the term Phikdickian) with the alternative version being his main stream examination of reality Confessions of a Crap Artist (can anyone really tell me what happens in that book?) Here's my question, is there something wrong with me for thinking Dick was better at writing short stories than novels? Excluding Do Androids Dream of Electric Sheep and A Scanner Darkly. His short stories have changed my life. I'll never look at teddy bears without wondering how the war is going. I'll always be afraid my towel is going to kill me or the next mat I stand on might eat my feet or that someone's punch tape will break and I'll disappear or that the plants next to my house are starting to look suspiciously like me or that I really am Hauser. I always wonder if there ever was a majority report in the first place or if every new person I meet is the sixth variety and I know I will never be able to ever see a gumball without wondering just what exactly are the ingredients in artificial flavoring.

Another question I've often wondered is if The Man in the High Castle was published in today's political environment would it still win a Hugo Award?

Remember: Philip Dick is safe only when used as directed.

A student at Carroll College in Helena, Montana recently submitted a thesis paper discussing THE MAN IN THE HIGH CASTLE. You can read the paper, "The Reality of Unreality: Alternate History Science Fiction of the Cold War as a Barometer of Historical and Philosophical Consciousness in American Popular Culture," at http://www.carroll.edu/library/thesisArchive/DixonA_2012.pdf