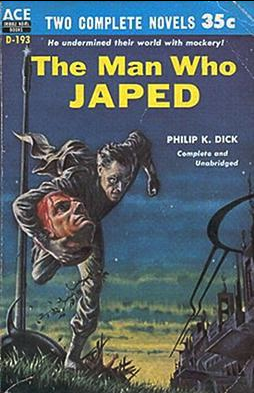 During the last few weeks of the pandemic I've been holing myself up in my basement laboratory writing screenplays. In other words, I've gone quite mad.

One of the challenges I gave myself was to create a tv show adaptation of PKD. Many of the best PKD adaptations (The Matrix and Eternal Sunshine of the Spotless Mind, I'm looking at you) don't try to translate specific stories by Dick onto the screen, but instead often just try to catch his "flavor." Maybe the story has a "dream within a dream" motif like Inception, or a false reality like The Truman Show.

I was just trying to capture the Dickian vibe, and I very quickly identified an aspect of Dick's writing that hasn't received very much attention: his playfulness.

The Oxford English Dictionary defines play as an: "Exercise or activity engaged in for enjoyment or recreation rather than for a serious or practical purpose."

On the one hand, this definition seems not to apply at all: I mean Dick wrote for a paycheck, and he relied on those paychecks to put food on the table. He was not a dilettante or a hobbyist, he was a pro. Ultimately, Dick wrote for the practical purpose of making money.

On the other hand, somehow the word "play" or "playful" seems especially apt to describe his both his approach to writing and to his work, and yet the adjective is not often applied to Dick's stories because they tend to be such intense downers. His work is playful in the sense that he seems to be having fun while he's doing it.

The mutant brother, Chester, who's face is upside down in We Can Build You.

The coin-operated door at the beginning of Clans of the Alphane Moon.

Setting the Penfield Mood Organ to feel the desire to watch TV, no matter what's on in Do Androids Dream of Electric Sheep?

But those are just jokes, man. He's just being funny. What's playful about it?

The difference is that these jokes are light touches that take place around the edges. These feel, at least to me who's read all of his work a couple times, like improvisational additions, stuff that's just flowing out of Dick's head as he's typing.

The thing that differentiates this from a more traditional notion of "humor" in writing is that I would argue these touches are there because Dick enjoys putting them there more than he anticipates the reader will enjoy finding them. There's a sense throughout Dick's irv that his primary audience is himself. By the way, nowhere is this dynamic more obvious than in his Exegesis, Dick's longest (both in terms of time and output) writing project which was almost entirely composed with himself in mind as the only reader. 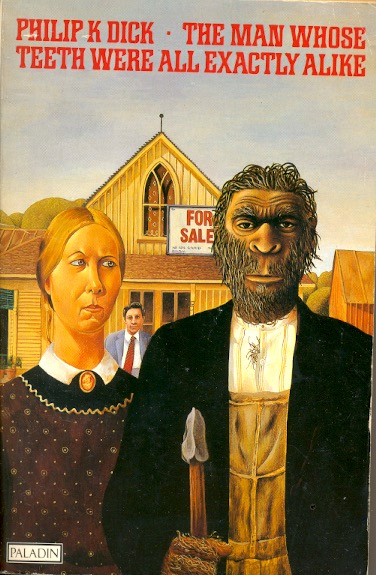 Ever notice when Dick seems to get going down a plot track that threatens to run out of steam, he simply has the character reverse course, or dramatic events intervene to knock the story out of the rut it was falling into.

A writer with more time and with a different approach to writing would likely go back and cut the wrong turn out of the plot entirely. Dick leaves the whole thing in, complete with a sort of awkward three-point turn in the middle where the action hangs a U-ie. The wrong turn becomes a fun sort of side quest simply to rediscover the story's forward momentum. The best example I can come up with right now is the ersatz police station in Do Androids Dream of Electric Sheep? but I think that's too brilliant and significant thematically to be considered a "wrong turn." So I''ll have to look for some of those myself, or you'll have to throw some examples you can think of in the comments.

It seems to me it is this particular sense of "playfulness" that differentiates him and other New Wave writers from the earlier guard of Asimov, Clark, and Heinlein. Dick famously said of Heinlein's Stranger in a Strange Land, "You could roll a joint up in that book and you still wouldn't get off."

Here are a couple assertions we can debate:

Dick is less "playful" in his mainstream fiction than in his genre fiction.

If so, this suggests something about the level of seriousness with which Dick viewed the respective genres.

Here are a couple questions I have:

Who are some of Dick's contemporaries and literary antecedents that deployed a similar playfulness?

Lem comes to mind, as does Spinrad.

What if the current science fiction market is so selective that this kind of looseness no longer makes it out of the slush piles?

That would be a bummer. As soon as I identified this aspect of Dick's writing, I realized it was one of the things I like the most about his work.

How about this quote on interpretation from Derrida that I really wanted to include, but couldn't quite shoehorn in?:

Is Dick also "playful" insofar as his work resists holistic cohesion? It seems to slip out of any attempt at reductive characterization doesn't it? But then, doesn't everything?

As a quick answer to your first question - who are Dick's contemporaries in play? - Richard Brautigan is another Californian writer who springs to mind. There's a great essay by Ian Bell on Trout Fishing that goes into how Brautigan uses linguistic play to convoke cultural history and engage in a discourse about the kind of material process that underpins the (often romanticised and abstracted) labour that goes into writing. I think this has quite a lot of relevance to Dick, where humour and playfulness with genre tropes, for example, often belie an engagement with the historical and material conditions of writing. Bell uses the phrase a "tinker of words" to describe Brautigan, and I think this has quite a lot of truck with Dick, too. Tinkering is the kind of middle ground, embodied in Dick's artisans and repairmen, that facilitates the dialectic between work and and play.