Philip K Dick Can Ogle Them For You Wholesale 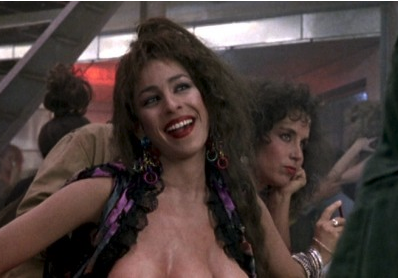 Philip K Dick was way into women's breasts. This obsession has long been noted. The old Frolix-8 website, which was big back in the Total Dick-Head heyday  (it seems to have succumbed to kipple in 2015), started a Project to catalog all of the descriptions of breasts in Dick's fiction, and went through 53 different PKD texts in a quest for breasts.  Have you thanked Al Gore for inventing the internet recently?
Here's one from Gather Yourselves Together (have your cringe on standby for this one):
"Her breasts amazed him. They did not jut out and up. They did not swell, pressing forward as the drawings had shown them. They hung down, and when she bent over they fell away from her. They bounced and swung when she picked up her clothes, bending over and reaching down to dress. They were not hard cups at all, but flesh like the rest of her, soft pale flesh. Like wineskins hanging on tent walls in Middle East villages. Sacks, wobbling flesh sacks that must have got in her way every now and then."
From The Three Stigmata of Palmer Eldritch:

"She had a narrow, erect body, a truly superb carriage...and small, up-jutting breasts with nipples no larger than matched pink peas. Or rather matched, pink pearls..."
In Do Androids Dream of Electric Sheep?:
“I like her; I could watch her the rest of my life. She has breasts that smile.”
Then there's our winner from Dick's short story "Retreat Syndrome":
“Her tone was bitter; her breasts pulsed with resentment.”
Rumor has it there's even a unpublished poem by Dick titled "Boobs."
Dick's obvious fascination with breasts has always been treated either as a kind of wink-wink joke among many of his male fans,  or as evidence of his deep-seated sexist attitudes.
Why can't it be both?
But something occurred to me recently that changed the way I looked at all of this: Philip K Dick's twin sister Jane died in infancy, because his mother failed to produce enough milk to sustain them both.
Often in Dick's fiction, the unfeeling, apathetic, women characters (the "bitch-wives" as they've been called by mostly male scholars) are depicted as flat chested. Oh yeah, and a lot of these characters are also based, at least in part, on PKD's mom, Dorothy.
Of course lots of science fiction writers were obsessed with breasts (say that three times). Isaac Asimov I'm looking in your general direction. And Robert Heinlein I see you too. And they didn't have twin sisters that died of starvation, so maybe it's something else.
Friend of the blog, Ted Hand, offered this insight: "I'd also think of the literary context of imitating the Beat Generation dudes feeling liberated to let out their horny no matter how misogynistic." Adding, "Like you get this new freedom to do something edgy, let's spray paint the secretary's breasts blue."
I think there's something to what Ted is saying. And, in the genre more widely, I think a lot of New Wave authors were pushing the upper age range of science fiction into full-blown puberty and so a little good natured phallo-centric sexual titillation was a selling point.
We'll never know the precise combination of circumstances that led to Dick's appreciation for breasts, and it's probably better that way. But, personally, I can't stop thinking about PKD as this powerfully tragic figure, and so in my reading of him, almost everything returns to these powerful traumas that resonated through his life.
Sorry I was away for a bit. I wrote a SEINFELD script about Coronavirus, because reasons.
Posted by Ragle Gumm at 12:59 PM