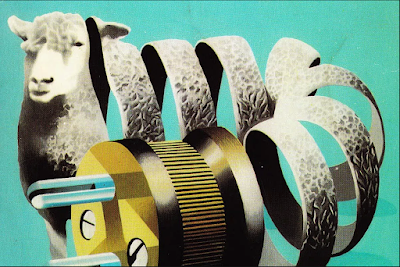 "Examining the schedule for January 3rd, 2021, he saw that a businesslike professional attitude was called for." - Do Androids Dream of Electric Sheep?

Well, what have you set your Penfield to today? "Awareness of the manifold possibilities open to me in the future . . ."? That's a good one. Seems appropriate for the new year. Perhaps a bit on the optimistic side, but if you can't digitally stimulate some optimism you're doing it wrong.

But seriously, Dick originally set the novel in 1992. The date was moved back in subsequent editions. This seems to be a literary situation unique to science fiction: when the year the novel takes place has to be moved forward to keep it in the future. A cursory Google search reveals no similar change. Can you think of a SF novel that's had the year changed?

Dick provided dates for a lot of his novels, and most of them weren't set more than a couple hundred years after they were written. This differed from folks like Asimov and novels like Brave New World that imagined worlds many centuries after the stories were written. I'm pretty sure that's one of hallmarks of New Wave SF, that there were more near-future stories. The nearness of those dystopias amplified the power of those texts' social critique.

Perhaps an overlooked criteria when defining science fiction is to say that it occurs in a now that hasn't happened yet, or happened differently (where perhaps a guy is sitting on a bench rubbing a piece of jewelry, bumming that the baddies won WWII).

Will the book's current publishers move the year up yet again? Perhaps 2050 or 2070?

Think about that for a sec! Talk about a living document. Science fiction seems, at its core, to be about possibility, and so it is with great ambivalence... or weirdness, or something, that one stands on a date when what is suggested as possible becomes reified into the unalterable certainty of history (which of course is neither unalterable, or certain, but at least it's over).

Faulkner said, "The past is never dead. It's not even past." What's the inverse? "The future is never alive. It hasn't even been born yet."? The future is like the distance between our reach and our grasp. It's where, or rather "when," we can imagine the possible heavens and hells that provide us with the clarity we want to feel about our now (or rather the illusion of clarity, but that's nothing to sneeze at).

Fans of James Joyce celebrate Bloomsday every year, as a way of respiring Joyce from the dead, and injecting his novel with a jolt from the living. What would a Deckardday involve?

Dick's publishers may move the setting year of his most popular novel forward for similar reasons: to keep that fiction alive with possibility, rather than another set of predictions that didn't come true. But I think reading SF for prognostication is mostly missing the point. Orwell's 1984 will never be retitled 2084. Well, maybe it would. I shouldn't underestimate people's capacity to miss the point.

Anyway, the future Dick predicted has come true in so many ways. I did an interview with Salon in 2018 about how 2017 was especially Dickian, not knowing the whole thing would get way more uncanny. I said this: “Dick is especially relevant in the age of Trump because we are living in a world where the authentic and the artificial have exchanged places,” Gill mused. “We live in a time when it is impossible to know if what we are seeing is real or is being manipulated, ‘photoshopped.'"

So, time is funny: it just keeps going. I kept meaning to come here and update the blog, but never got around to it. I'm going to try to do better this year. I'm working on a presentation about Dick's interest in psychology for the Northeastern Modern Language Association in March so I'll be in the neighborhood, so to speak. And, in the unlikely event that I don't start posting more, I can come back and change this post so that I've never made that claim in the first place.

Ray Bradbury's The Martian Chronicles was originally published (1950) with the first segment starting in 1999. As that year approached, they bumped that up to 2030 in new editions.